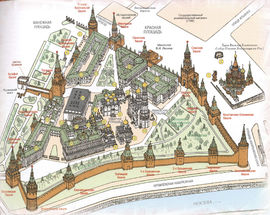 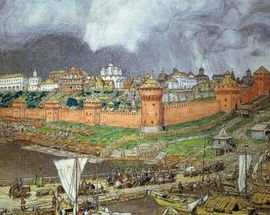 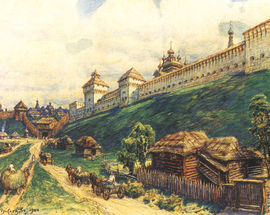 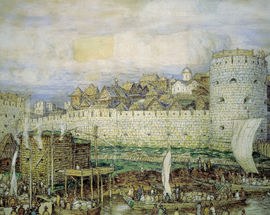 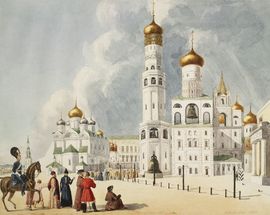 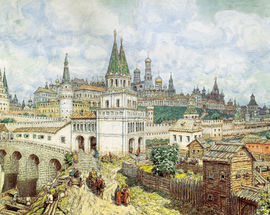 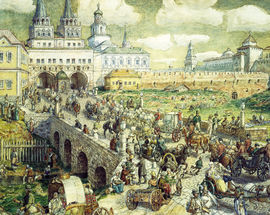 The street plan of central Moscow forms an impressively ordered pattern of concentric circles, clearly marking the city's development outwards over the centuries. In the middle of this great Catherine wheel is the Kremlin, the fortified hill which formed the heart of the ancient city, and which to this day houses the political HQ of the planet's largest nation. Within the world-famous red walls nestles a collection of buildings of various architectural styles, ranging from ancient Russian ecclesiastical, through Romanov imperial classicism, to 1960s Soviet modernism. While much is out of bounds to tourists, being part of the Government and Presidential estate, there are easily enough treasures open to the public to make the citadel an essential conquest.

Unlike Napoleon, who stayed here after his forces took Moscow in 1812, you will need a ticket to enter. There are a number of ticket booths, the most important being located in Alexandrovsky Sad (on the west side of the Kremlin), which in itself is a great people watching place. Having bought your tickets, leave any large bags in the cloakroom located near the ticket office, under the gate.

A "Kremlin Territory" ticket gets you into the site itself, along with all of the cathedrals and the more ancient buildings. To visit the Kremlin Armoury (where all the sparkly diamonds, jewels and so on are stored) you must buy a separate — and considerably more expensive — ticket, which will have an entrance time on it. This ticket can only be purchased before you enter the Kremlin.

Note that some buildings — in particular the Patriarch's Palace — sometimes host special exhibitions, entrance for which you must pay extra. The tickets for special exhibitions can usually be bought at the entrance to the buildings in which they are held, although it is advisable to check before you enter the Kremlin.

Cathedral of the Archangel Michael. A relative youngster on the Kremlin church scene, this cathedral was erected in 1505 and holds the tombs of Russian rulers from Ivan I to Tsar Ivan V. It also has more of an Italian renaissance feel to it with its Corinthian gables and turrets and white stonework.

Annunciation Cathedral. This imposing cathedral, where Russia's Tsars were christened and married, was built by Pskov architects in 1482. The frescoes inside are considered to be some of the most valuable in Moscow given that prominent artists of the time including Andrey Rublyev (also buried here), Theophanes the Greek and Prokhor of Gorodetz all worked on them.

Church of the Deposition of the Robes. Taking its name from an ancient festival where the Virgin's robes are transferred from Palestine to Constantinople (now Istanbul), this is a more modest cathedral nestled in a corner. Built in 1484-1485 by artists from Pskov, this church notably has stained glass windows. Along with some fine icons, inside you can also find wooden sculptures from the 15th century.

Cathedral of the Assumption. The grandfather of all the Kremlin churches, the Assumption Cathedral is the oldest and the biggest. Built in 1475 by Italian architect Aristotle Fiorovanti, this is where Ivan the Terrible was crowned Emperor in 1547 before becoming a stable for Napoleon's horses in 1812. Their soldiers made off with the chandeliers now hanging overhead, some weighing over 5 tonnes. The cossacks brought them back after they caught up with the light-fingered Frenchmen. In 1918 the last Easter service was held here. Services resumed in 1990.

The Patriarch's Palace. Once the home of the Moscow Patriarch, this grand medieval building is now a museum where ecclesiastical treasures of the Orthodox church are on display as well as various precious tableware, furniture, jewellery and clothing used in the court of the medieval Tsars. The building also often houses temporary exhibitions.

The Ivan the Great Bell Tower. The impressive 60 metre high tower was built between 1505 and 1508. The adjoining belfry was built 15 years later and contains some 20 bells. The biggest bell (the world's largest no less) however was too big to remain in its place and sits to the rear of the tower with a huge crack in it. In recent years the belfry has become home to a new high-tech exhibition which illustrates the history of the Kremlin's changing architectural styles. It is also now possible to climb up the tower (that's 137 steps to be exact) to admire the view over central Moscow and get a close up look at the bells. You must buy a separate ticket for the Ivan's Bell Tower excursion at the excursion office before you enter the Kremlin and you can only go up the tower at the time indicated on your ticket.

General admission to the Kremlin 250 - 500Rbl. Excursions with English speaking guide 2,500Rbl (you should reserve in the month before your visit). Tickets can be bought at the ticket offices outside the Kremlin walls or online. It is necessary to validate online tickets in ticket-office in Alexandrovsky Garden before visiting.

Always check if the Kremlin is open during Russian holidays! Last week it was open for tourist groups only and 4 days (!) closed for individuals. It was announced poorly; a few days before 12th June (Russia Day) and many tourists could not book Kremlin tours anymore - they visited Moscow for nothing.
21.05.2011
Charles

The park outside the Kremlin walls Aleksandrovsky Sad garden is lovely to stroll around; so much different people to see you can sit there and watch them for hours. Was there whole afternoon sitting in the sun read a book eat Russian ice cream and chicken kebab!
Take your guide with you Download a pdf