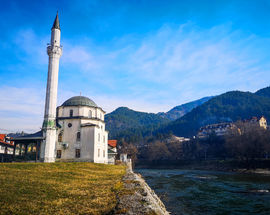 Located just 70km north of Mostar, Konjic often gets overlooked by visitors travelling between the Herzegovinian capital and Sarajevo to the north. More fool those who don’t stop in this little marvel, a city of some 25,000 people that is home to one of the region’s great stone bridges and a seriously excellent bit of Yugoslav nostalgia. The aforementioned bridge is the Stara Ćuprija, an Ottoman beauty that was constructed in the 17th century and proudly straddles the Neretva in the centre of town. The nostalgia? Well, it doesn’t get much cooler than Tito’s own bunker, ARK-D/0, a nuclear bunker built specially for Uncle Joe and 350 of his closest confidantes. A visit to the bunker is a most for any YugoNerd. If you are travelling to Konjic from Mostar, be sure to stop in Jablanica on the way back for some lamb — the best in the country, if you’re asking us.

featured
/mostar/lukomir_167881v
Okay, the ‘last village’ thing is something, but Lukomir is the kind of place that really doesn’t need branding to get over. This is a gorgeous village where …
see more
Featured
See

Polje Bijela bb
featured
/mostar/armijska-ratna-komanda-d-0_167833v
If you’re the sort who gets all a flutter at all things Yugoslavia, you owe it to yourself to organise a visit to this place. Found just a short drive outside …
see more
Featured
See

/mostar/boracko-lake_167879v
Look at it shimmer, look at it shine. Blessed by the big man to take up a prime piece of real estate at the foot of Prenj, Boračko Lake is a gorgeous glacial …
see more
See

/mostar/heritage-museum_167877v
A relatively new establishment in the centre of Konjic, the Heritage Museum tells the story of this charming town from beginning to, well, the future. The …
see more
See

/mostar/mehmed-causeva-mosque_167875v
Konjic’s most picturesque mosque rests opposite Restoran Han and next to the Zuko Džumhur house. The Mehmed-čauševa Mosque is a 500-year old beaut on the banks …
see more
See

/mostar/mithraeum_167878v
We’ve long claimed that the sun is the best thing one can choose to worship, so of course we’re going to feel somewhat smugly satisfied when such things are …
see more
See

/mostar/rakitnica_167880v
Bosnia and Herzegovina is full of places that could be considered ‘undiscovered’, at least in the sense of mass tourism, and most of them are accompanied by a …
see more
See

/mostar/zuko-dzumhur-museum_167876v
Zuko Džumhur was Yugoslavia’s favourite bohemian character, an artist with an eccentric take on the world who made incredible work that enchanting all lucky …
see more