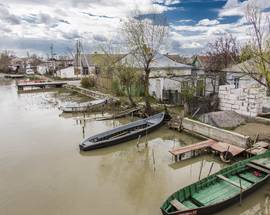 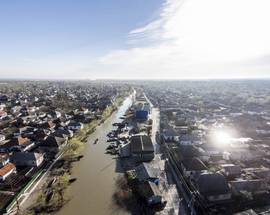 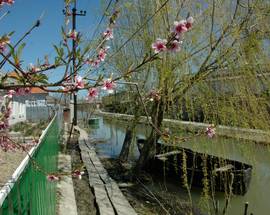 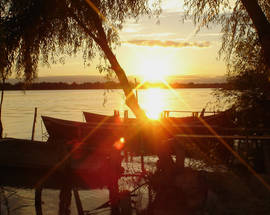 Vylkove is located on the outskirts of the Odessa region, at the mouth of the Danube River. After more than two thousand kilometres, the Danube River flows into the Black Sea here, spilling into three prongs like a fork. In Russian, Vylkove translates into fork, hence the origin of the name of the city.
There are only four streets in Vylkove, where all administrative buildings are located. Since the formation of the coast here has not stopped for centuries, locals decided that it would be safer to have the water under their feet. Each of the houses in Vylkove has its own pier and the channels (locals call them eriks), are used instead of streets. The only pedestrian ways are narrow wooden sidewalks. Gardens with crops of grapes and strawberries are located on the islands in the delta of the Danube River.
The history of Vylkove is associated with the reforms of the Russian Emperor Peter I. People who did not accept church reforms, moved from the Russian empire to this former Turkish territory. The Ottoman Port supported the “Old Believers” and even exempted them from taxes. Later settlers were joined by the Cossacks, who did not accept the dissolution of Zaporizhian Sich by Catherine II.
Old Believers form 70% of Vylkovo’s population. They zealously follow traditions, do not shave their beards, even their clothes are the same as their ancestors wore. They do not have TVs, video games, or computers, and live apart from other faiths. Even in the cemetery, they have their own areas.

NS-Plein 38
/odesa/Enjoii_74511v
You'll find Enjoii at the NS Plein (Railway Square) not far from the centre of town. It's the latest in a long line of sushi restaurants that have recently …
see more
Hotels

Stadhuisplein 320
/odesa/Miniwok_85689v
Miniwok is a good option for a quick healthy snack or a fairly cheap evening meal, but keep your hands and feet at the ready as communicating with the staff is …
see more
Hotels

Piushaven 17
/odesa/Shinzo_73489v
At Shinzo sushi, lounge and grill, you can eat all you like for a fixed sum of money, just like at many of the other sushi restaurants in Tilburg. Free ice …
see more
Hotels

Curlingstraat 1-11
/odesa/Sushi-Boulevard_85690v
‘A lot for a little’ is the maxim here in every respect. An all-you-can-eat meal can be had for a set price of €21.50 provided you finish …
see more
Hotels

Heuvelring 126
/odesa/Sushi-Koi_72766v
Although Tilburg is teeming with sushi restaurants, Sushi Koi still stands out. The menu consists of 29 vegetarian dishes as well as several types of sushi and …
see more
Hotels

Juliana van Stolbergstraat 23
/odesa/Tonys-Wok-Away_73209v
If you’re looking for a quick bite and would like to keep it somewhat healthy, this isn't a bad choice. as there’s always a soup on offer, as well …
see more
Hotels

Heuvelring 90
/odesa/Mojo_126376v
Big, that’s what Mojo is. The spaciousness of the building is exploited to its full potential, meaning you can hear the conversations at the tables …
see more
Hotels

Heuvel 25-26
/odesa/Sumo_126375v
Tilburg is full of sushi restaurants, and Sumo is one of its best. Tasty maki, sashimi and nigiri sushi, and a wide range of side dishes. To top it all off, …
see more

Contact us feature
Learning Ukrainian feature
10 Reasons to Visit Odessa feature
see more
This site uses cookies. By continuing to browse the site, you are agreeing to our use of cookies. Find out more here. AGREE
Countries
Top