The islands of Krapanj, Zlarin, Prvić, Kaprije and Žirje may seem close to Šibenik geographically, but are light years away in terms of atmosphere. Featuring stone-built settlements that appear to have changed little in decades (perhaps even centuries), surrounded by relatively unspoilt nature, they offer an entirely different experience of the Adriatic. Getting to the islands is easy: Krapanj is accessible by boat (roughly hourly) from Brodarica, the coastal village 7km southeast of Šibenik; while Zlarin and Prvić lie on the route of the Šibenik-Vodice ferry (2-4 daily depending on season). A separate ferry service (1-2 daily) sails from Šibenik to Žirje and Kaprije.

Named after the locally present caper (kapar in Croatian), Kaprije is a blissfully unspoiled island with no roads and hardly any motor vehicles of any sort. The small village of Kaprije caters for the hundred-or-so permanent inhabitants. Private rooms and apartments cater for a summer influx of tourists, although the island is never in danger of being overrun. Kaprije’s uniquely sheltered bay is an increasingly popular anchor-dropping point for yachts folk exploring the nearby Kornati, while the island’s numerous coves are ideal for a spot of secretive bathing. 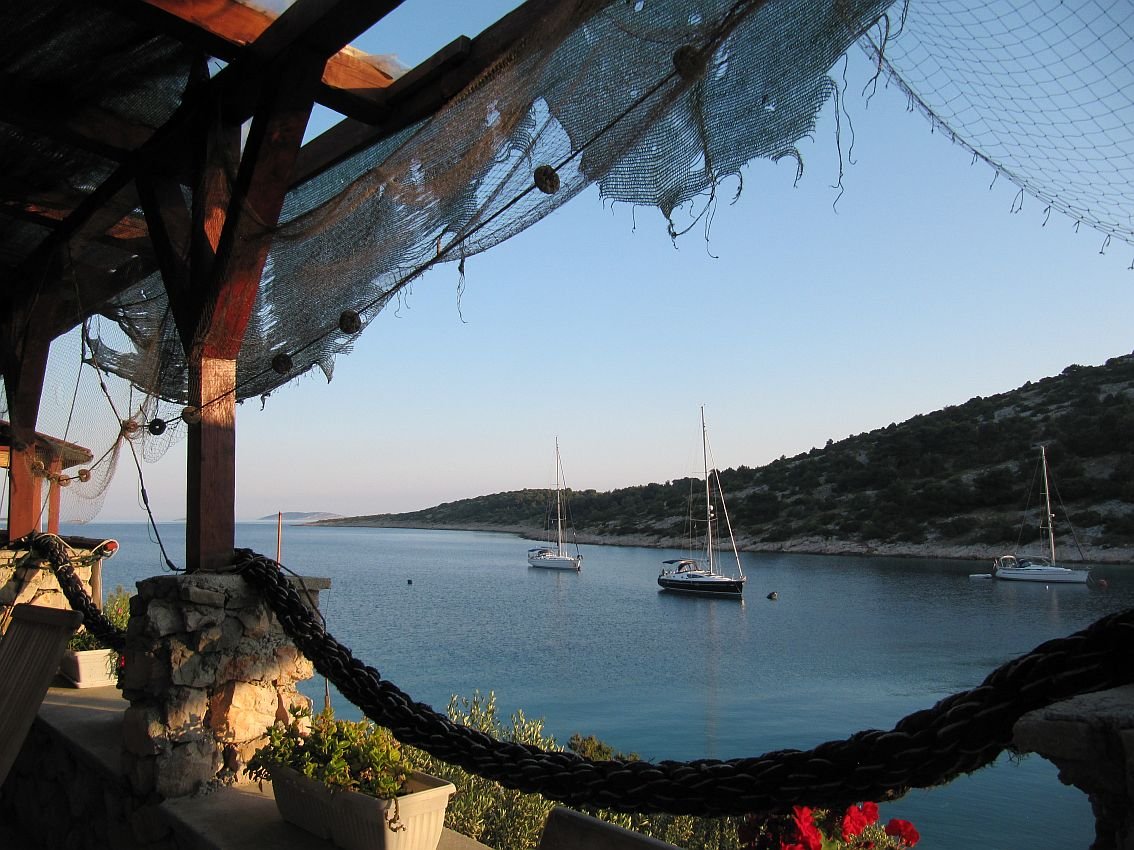 Lying only 300 metres off the shore of Brodarica, the low-lying island of Krapanj was once famous for being the centre of the Adriatic sponge industry, with most of the island’s male population devoting their time to sponge-diving. Nowadays Krapanj is a relatively quiet but undoubtedly attractive spot, with a line of stone houses along the mainland-facing waterfront, and a handful of souvenir shops selling sponge-themed gifts.

Slightly inland from the shoreline is the Franciscan Monastery, founded in 1435 when monks from Bosnia were gifted the island by local nobles. The monastery museum contains religious artworks, including an extraordinarily expressive 15th-century crucifix carved by Split-based priest Juraj Petrović. The walled graveyard next door contains several family tombs honouring one-time sponge divers, many pictured in relief form wearing their large spherical deep-sea helmets. Head to the basement of the nearby Hotel Spongiola (see p.17) to find a small but entertaining display of exhibits connected with the local sponge-harvesting industry, including a lead-booted diving suit, and early 20th-century air pumps. 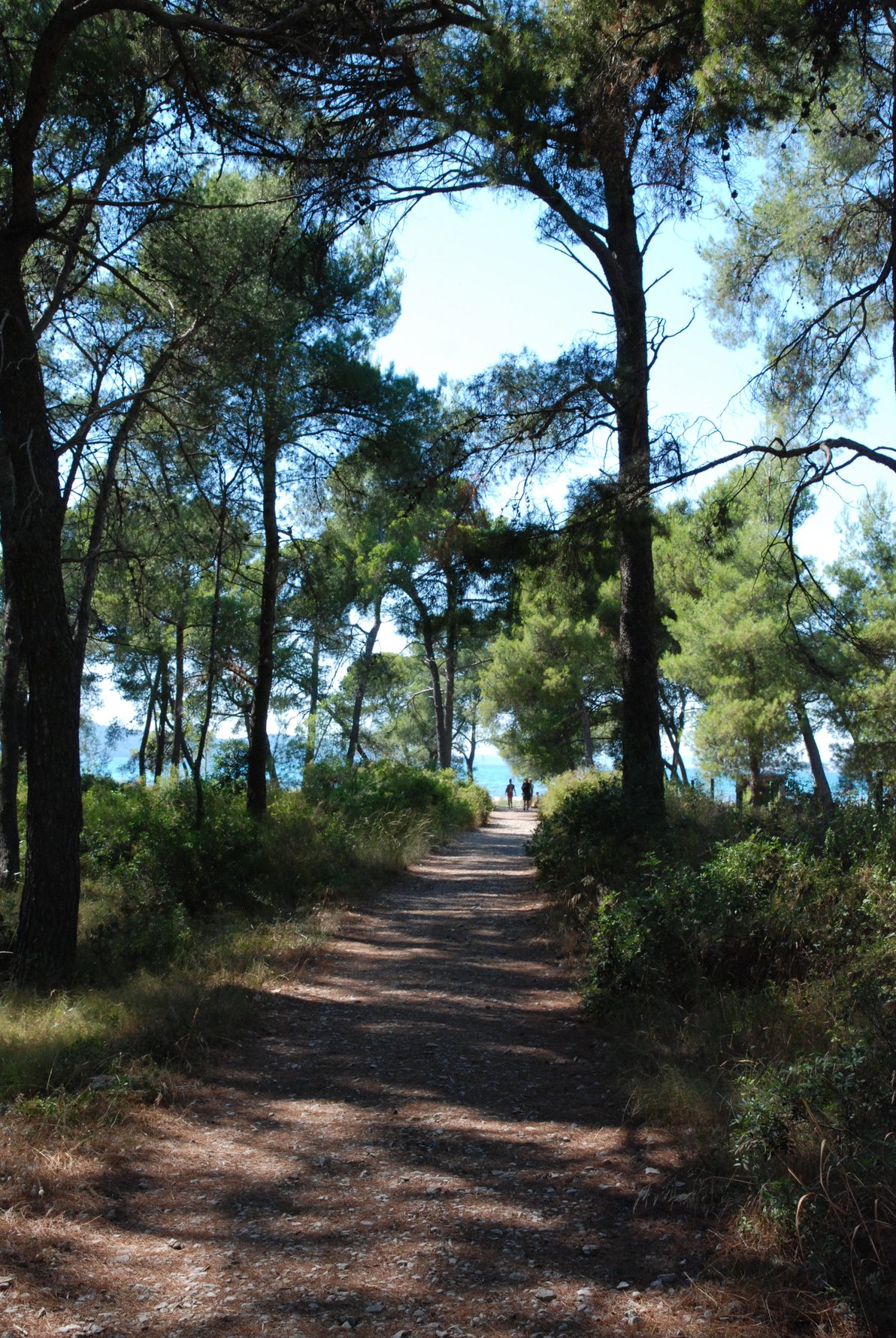 In many ways Prvić is a smaller version of Zlarin, a verdant and unspoiled island with plenty in the way of traditional Mediterranean architecture. It has two main settlements – Prvić Luka at the eastern end, and Šepurine at the west – Prvić has a slightly larger permanent population and is marginally more lively as a result. Prvić was traditionally the summer retreat of Šibenik’s leading families, and remains associated with one great Šibenik name in particular - priest, diplomat and scientist Faust Vrančić (1551-1617). Vrančić was buried in Prvić Luka’s parish church. Educated in Padua, Vrančić served at the Habsburg court in Prague before devoting himself to his writings. His Latin-Italian-German-Hungarian-Croatian dictionary (published in 1595) was a landmark in Croatian language study. His more famous Machinae Novae, published in Venice in 1615, contains 49 copper-plate engravings of machines and inventions, in conscious homage to the inventions of Leonardo da Vinci published several decades earlier. Most famous of the illustrations is Homo Volans, which pictures a man descending through the air attached to a square canvas parachute.

English clergyman and scientist John Wilkins, writing some 30 years later, claimed that Vrančić actually tested the parachute himself by jumping from the belfry of St Mark’s Cathedral in Venice.

A narrow lane leads over the brow of a hill from Prvić Luka to the island’s other settlement, Šepurine. A hive-like village of stone houses, Šepurine is centred on a parish church whose distinctive bulbous belfry is topped by an extravagant weather vane. 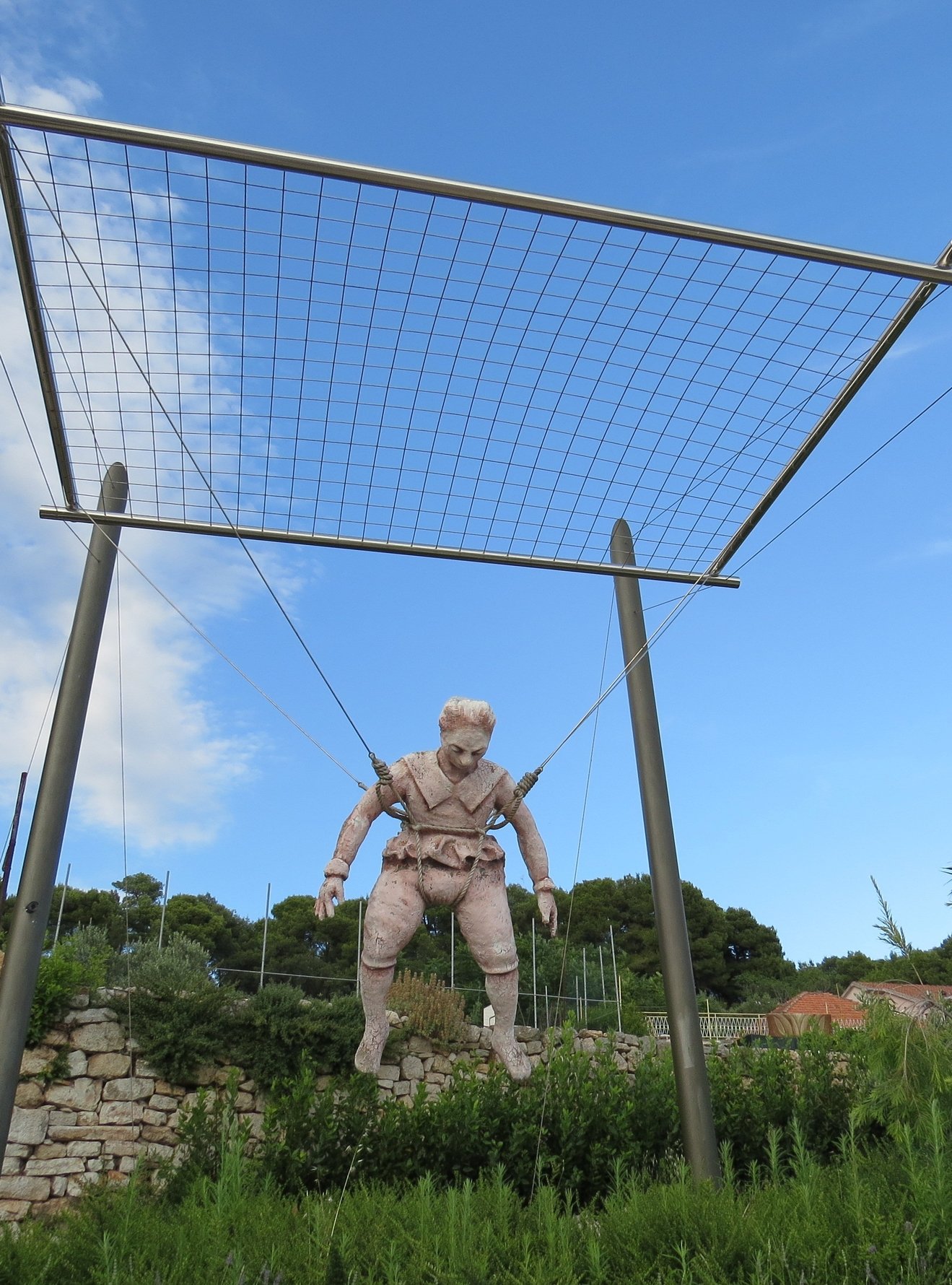 Of Šibenik County’s permanently populated islands, Žirje is both the largest, and the furthest out to sea. With a scattering of private accommodation but no hotels (and, like Kaprije, virtually no motor transport), it is something of a Shangri-la among tourists for whom the phrase “getting away from it all” really means what it says. Most of the island is covered in maquis, although vines, olives and figs make up an important part of the landscape. Newly marked bicycle- and footpaths provide an ideal means of exploring the island. 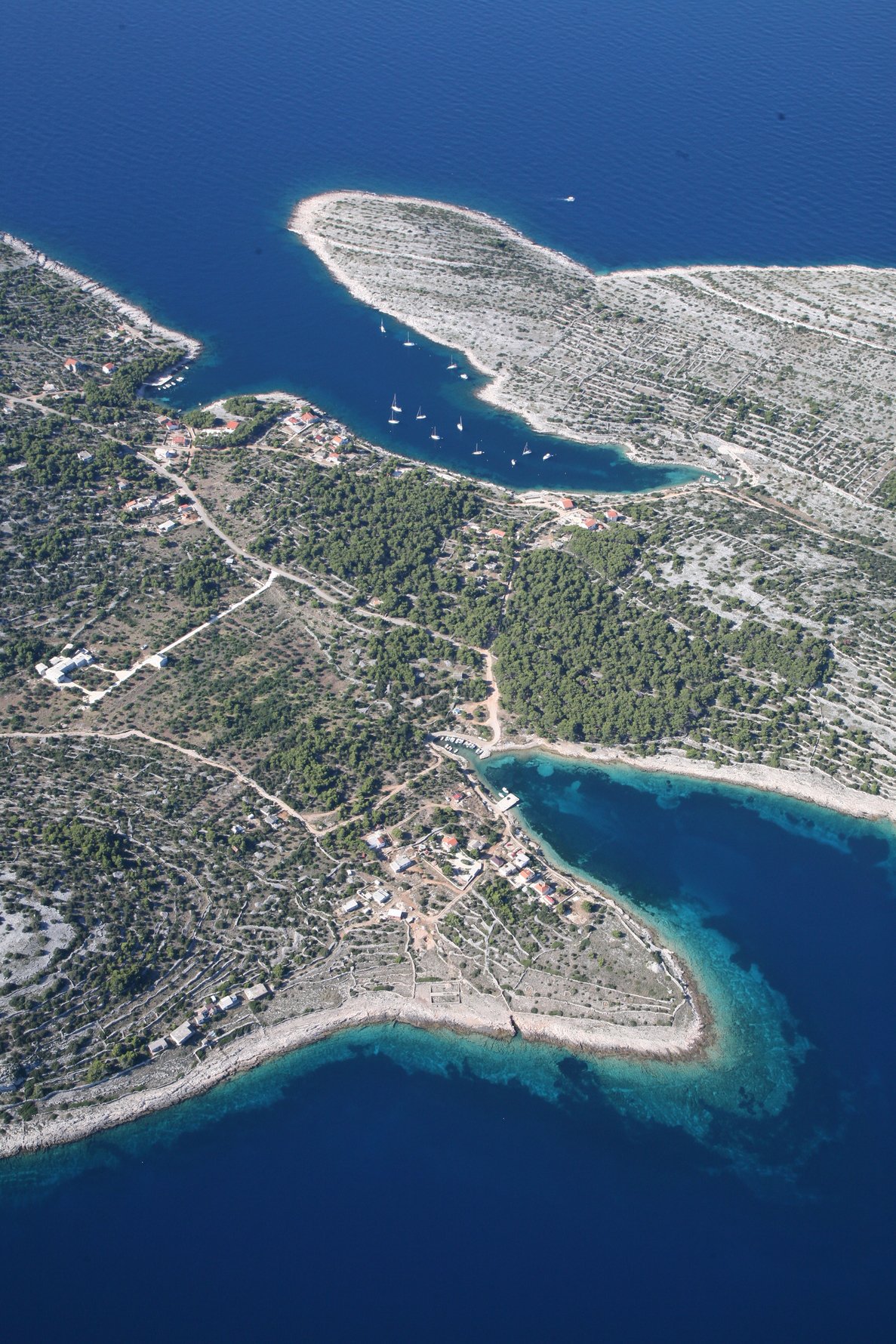 Lying right opposite St Anthony’s Channel, the narrow waterway that connects Šibenik with the open sea, Zlarin is a green island covered in olive groves and wild shrubs.Zlarin has got the longest island promenade in Croatia (127.50m). Saint Fortunato is the protector of the island Zlarin so the most frequent names on the island are Srećko, Nato and Refortunato! Coral fishing has been associated with the island ever since the 15th century, when the raw coral was exported to Dubrovnik and other cities to be processed into fashion accessories. During the 1950s coral fishing went into decline due to depleted stocks, although at least one coral-processing workshop still exists on the island, and several souvenir shops open up in summer to sell coral bracelets and earrings.

Zlarin village is a beautiful settlement of stone-built houses arranged around a bay. Key landmark is the impressive clocktower built in 1829 and known as the Leroj (local version of the Italian word for clock, orologio), crowned by an attractively spindly weather vane. Slightly uphill to the west is the 18th-century Church of the Assumption, worth a peek on account of the hairy-looking gargoyles gazing down from either side of the pediment. 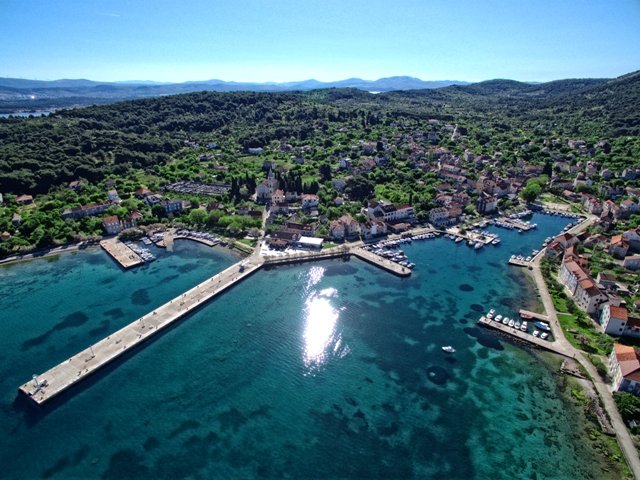 Occupying a stone house at the eastern end of town, Zlarin Museum displays finds from a shipwrecked Roman galley found by marine archeologists just off the Šibenik coast, and an “ethnographic room” containing domestic utensils and traditional costumes. The upper floor of the same building houses the Zlarinka coral workshop, where coral is cut, burnished and made into jewelry. You can admire all manner of necklaces, bangles and baubles in the Zlarinka shop, and take a peek at the polishing process in the work-room next door.

Further east, the Chapel of St Simon (Crkvica sv. Šime) has a small collection of church treasures, open in the summer months. Continue along the road past the chapel and you’ll arrive after 10 minutes at the Church of Our Lady of Raselj (Gospe od Raselje), a church of medieval origins that contains a miracle-working image of the Virgin. Inside, model ships hang from the ceiling as a gesture of thanks from devout sailors.

/sibenik/the-zlarin-legend_78283v
The highest point of the Klepac Island is 169 meters high and the church of Mary from Rašelj was to be built there. Things however did not go to plan - a group …
see more
Zlarin

I Ulica 1a, Prvić Luka, Prvić Island
/sibenik/the-faust-vrancic-memorial-centre_116373v
Venice, 16th century, Vrančić takes the plunge and makes it! You are looking at the first formal inventor of the parachute. Being a polymath, he was born in …
see more
Art Galleries

Niz Bebana bb, Zlarin
/sibenik/zlarinka_78054v
Jewellery made from red Adriatic coral is hard to resist and is part of both the traditional and modern jewellery vernacular of Dalmatia.
see more