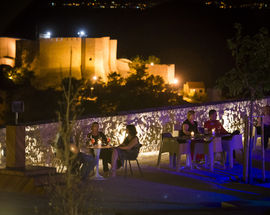 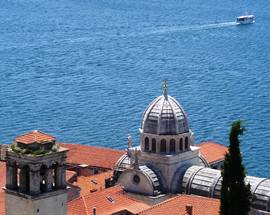 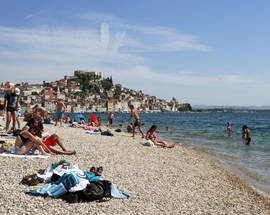 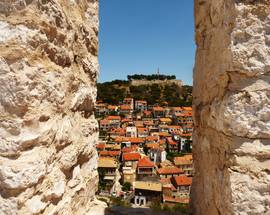 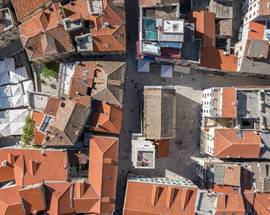 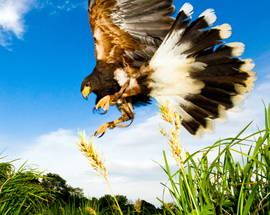 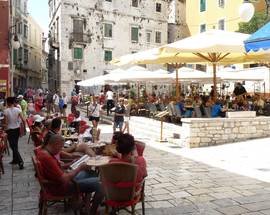 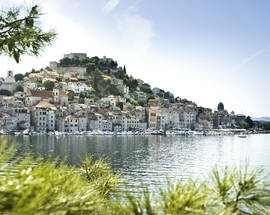 Šibenik’s Old Town is a typical Mediterranean medieval city, with a warren of pedestrianized alleyways and piazzas overlooked by green-shuttered stone houses. Inaccessible to traffic, its narrow and frequently stepped streets are left to pedestrians, cats, and the occasional moped. Šibenik’s historical core is divided into three parts; the Grad (literally “Town”), which stretches from the Cathedral eastwards; Gorica, comprising the gently sloping streets that stretch uphill towards St Michael’s Fortress; and Dolac, the maze of hillside alleys to the west. The Old Town is entered from the large open square known as the Poljana, from where the street now known as Zagrebačka (sometimes called “Masna ulica” or “Greasy Street” due to the number of inns that used to line it) heads through Gorica towards the Fortress of St Michael, passing a quartet of historical churches on the way. Roughly parallel to Zagrebačka is the street popularly known as the Kalelarga (officially Kralja Tomislava), which slopes down towards the Cathedral.

Škugori 47a, Dubrava kod Šibenika
EDITOR'S PICK
/sibenik/sibenik-falconry-centre_119002v
Located in woods near Dubrava 8km north of the city centre, the Šibenik Falconry Centre was founded in 2000 to protect birds of prey and educate the local …
see more
Editor's pick
Fortifications

Zagrađe 21
EDITOR'S PICK
/sibenik/st-michaels-fortress_76955v
One of the first things that visitors see when entering Šibenik by road is the silhouette of St Michael’s Fortress, which crowns the pyramidal hill above …
see more
Editor's pick
Essential Šibenik

EDITOR'S PICK
/sibenik/saint-anthonys-channel-promenade_128393v
See one of the most amazing entrances to a city from the sea. Saint Anthony’s Channel is a 4.4km new promenade surrounded by Mediterranean vegetation and …
see more
Editor's pick
Fortifications

featured
/sibenik/st-nicholas-fortress_76966v
Jutting out into the St Anthony’s Channel, the narrow neck of water that leads from the Šibenik Channel to the open sea, the smooth-pointed triangle of St …
see more
Featured
For Kids

Kralja Tomislava 15a
EDITOR'S PICK
/sibenik/aquarium-sibenik_114954v
Upon entering this old stone house situated 50m from the Cathedral, embark on a journey which brings to life the local residents of the Adriatic Sea. This …
see more
Editor's pick
<< < 1 2 3 4 > >>