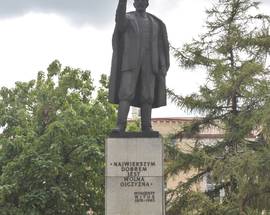 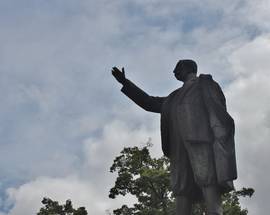 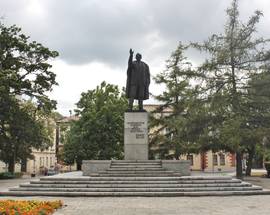 Among the most revered heroes of the area, Wincenty Witos (1874-1945) was born a peasant in the nearby village of Wierzchosławice, where he rose to prominence as a politician to become leader of the Polish People's Party (PSL), a member of Parliament and served as the prime minister of the interwar Second Republic of Poland three times. Overthrown by Piłsudski's coup in 1926, Witos was imprisoned and lived in exile before returning to PL in 1939 only to be promptly imprisoned again by the Germans. He died in 1945 and is buried in his native Wierzchosławice (about 10km west of Tarnów), where his family home and farmstead have been turned into a branch of the Tarnów Regional Museum. His bronze monument was unveiled in 1988 and stands over 6 metres tall just east of the market square near ul. Lwowska. The pedestal bears the inscription, "The greatest good is a free Fatherland."