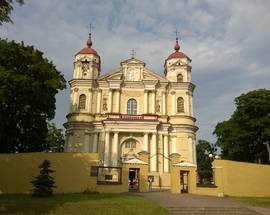 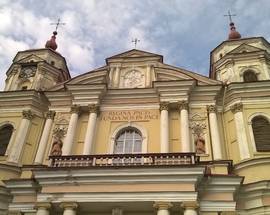 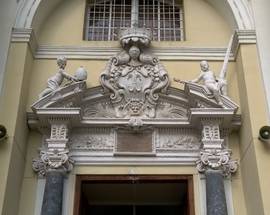 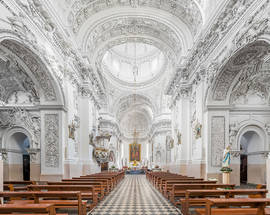 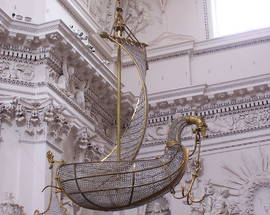 Possibly built on the site of a place of worship to Milda, the pagan goddess of love, this Late Baroque masterpiece was constructed in 1668 by Michael Casimir Pac, the Grand Hetman of the Lithuanian armies, who never lived to see its completion. Financed by two of Pac’s cousins and completed under several master craftsmen including the Polish Jan Zaor and Italian Gianbattista Frediani, the plain façade betrays an interior by Giovanni Pietro Perti and Giovanni Maria Galli that’s truly stunning. Containing over 2,000 stucco mouldings representing miscellaneous religious and mythological scenes, of equal magnificence are the 20th-century altar containing a wooden figure of Christ which features real human hair brought from Rome in 1700 and a Latvian chandelier in the form of a boat made of brass and glass beads and dating from 1905.

This is a Catholic church I think so no service, I believe it's called Mass. Just sayin'.:)
Take your guide with you Download a pdf