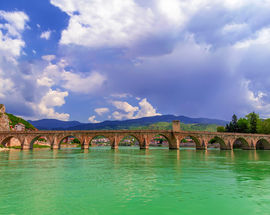 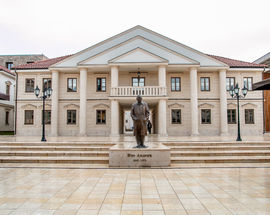 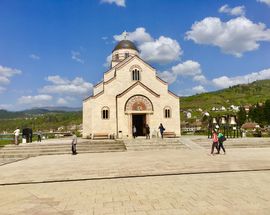 Višegrad isn’t like other places. Culture takes on a different meaning here, although we’d expect nothing less from a town made famous by the great Ivo Andrić. The great man is found around every corner in the city, from the city within a city named after him to the bridge that brought him the Nobel Prize in Literature. There is more sightseeing in Višegrad than the man from Travnik however, and the surroundings are full of secret stunners and the marvellous nature that keeps us enraptured by this most magnificent region.

Kralja Petra bb Visegrad, Republica Srpska
featured
/visegrad/pisana-stijena_166557v
Not too far from the village of Žlijeb is a true mystery, a piece of the natural world that features the unmistakable touch of human art. Known locally as the …
see more
Featured
Višegrad

Palih boraca 6
featured
/visegrad/mehmed-pasa-sokolovic-bridge_166545v
There are plenty of bridges on the Drina river, but there is only one ‘Bridge on the Drina’. Ivo Andrić may have made it famous, but there is more to the …
see more
Featured
Višegrad

Kralja Petra bb. 73 240 Visegrad
featured
/visegrad/ivo-andric-memorial-classroom_166549v
Want to see where the great man studied as a young man? You could argue that the journey from talented young boy to iconic author began here, so don’t be …
see more
Featured
Around Višegrad

Butmirska cesta br. 14 73247 Dobrun, Republica Srpska
featured
/visegrad/dobrun-monastery_166555v
A little special is this. Dobrun Monastery lies just 12km away from Višegrad and is more than worth the trip, especially if beautiful serenity and tranquility …
see more
Featured
<< < 1 2 3 > >>

11 Restaurants and Cafes That Our Editor Will Be Gluttonously Embracing Once This Godforsaken Lockdown is Over feature
24 Hours in Višegrad feature
Books to Help You Armchair Travel Around Bosnia & Herzegovina feature
see more
This site uses cookies. By continuing to browse the site, you are agreeing to our use of cookies. Find out more here. AGREE
Countries
Top