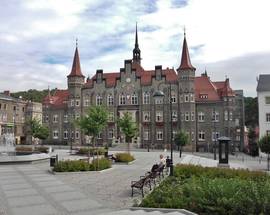 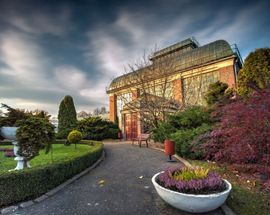 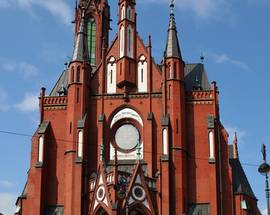 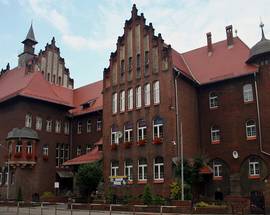 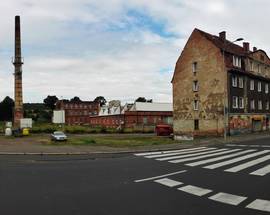 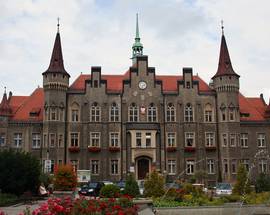 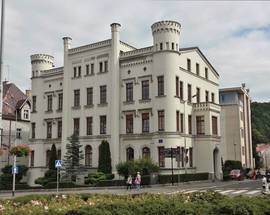 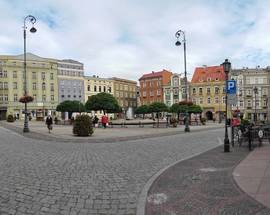 Just 70km from Wrocław is the rarely visited, sleepy little town of Wałbrzych, a former bustling coal mining centre spread out over a few foothills of the Sudety Mountains. It’s an unlikely place to make international news, and yet it’s been in the spotlight on and off since August 2015, as one of the biggest stories to grip Poland in recent times unfolded here - the search for a mysterious Nazi gold train, rumoured to have been buried in an underground tunnel with tonnes upon tonnes of stolen treasure transported from Breslau (Wrocław) as WWII drew to a close.

Speculated treasure aside, Wałbrzych has some very real riches that make it a worthwhile day trip from Wrocław. Dating back to at least the 12th century, the Lower Silesian town boasts a vast industrial legacy of coal mining, porcelain production, and textile mills; complicated WWII history; and Poland’s third-largest castle. Venture here and you can visit a modern cultural centre located in a converted mine (the Old Mine Science & Art Centre), meander through lavish rooms at Książ Castle, gaze at some fine porcelain in a specially-dedicated museum, hike in the nearby Owl Mountains (Góry Sowie), and take in the atmosphere of small-town Poland, far removed from Wrocław’s cosmopolitan hum (and, for better or worse, many of its comforts).

As local legend has it, a Nazi train brimming with gold, jewels, and priceless art stolen from Poland and the USSR left Wrocław in late 1944 or early 1945 and never made it to its final destination, disappearing somewhere in the mountainous terrain between Świebodzice and Wałbrzych. Though no real evidence supports this tale, the story has been fuelled by not one, but two alleged deathbed confessions. The first came soon after the war, when a German worker remaining in the town accidentally found a blocked tunnel in the side of a mountain, which he believed held the missing train; fearing for the safety of himself and his family, he only disclosed his discovery in his dying moments to a certain Mr. Schulz working at the Wałbrzych train station. Schulz in turn passed this information to Polish miner Tadeusz Słowikowski as thanks for fending off two attackers who had threatened Schulz’s life. Słowikowski’s not-so-secret efforts to locate the train drew the attention of Polish communist authorities, who confiscated his map and launched searches of their own, to no avail.

The almost-forgotten story burst forth anew in August of 2015, when two treasure hunters - Piotr Koper of Poland and Andreas Richter of Germany - came forward claiming they had located the gold train with ground-penetrating radar technology after hearing the deathbed confession of an unnamed German involved in the original operation. The pair offered to disclose the location to the Polish government in exchange for a 10% finders’ fee, and a deal was soon struck. By September, the authorities sectioned off the search site, located at ul. Uczniowska in Wałbrzych’s Szczawienko district, at the ‘65th kilometre’ of the Wrocław-Wałbrzych railway, to clear it of trees and possible mines or booby traps (and keep out hordes of amateurs armed with metal detectors). Two months later, the treasure hunters and a team of experts from the AGH University of Science and Technology in Kraków were given the go-ahead to survey the area with magnetic field detectors, thermal imaging cameras, and radars; the results were disappointing - the official report stated that there was maybe a collapsed tunnel, but no train. Despite a firm negative from the AGH team, Koper and Richter decided to push on with their own funds, coming to an agreement with the site’s official owner, Polish State Railways. The long-awaited excavation works began on August 16th, 2016 and somewhat unsurprisingly, and to many people's disappointment, nothing was found... despite there being no firm evidence to support the existence of the legendary gold train, but legend lives on...

Another local legend, this time a singularly humdrum one, surrounds the origins of mining in Wałbrzych. According to the story, a young peasant boy was out herding sheep, bored out of his mind, when he noticed some shiny black rocks poking out of a foxhole. He collected these to show his ma, but she was less than impressed seeing the boy’s grimy hands (probably already imagining dark handprints all over her handmade linen) and sternly demanded that they be thrown out. The boy then inexplicably decided that throwing the rocks in the fireplace was a far better idea than making the two steps it would take to deposit them outside the hut, and the whole family was stunned to see the flames burning bright and hot as the coal caught fire. News of this unusual discovery spread quickly, and soon mines sprung up around the coalfield, which came to be known as Fox Hill (Lisia Góra).

This took place sometime in the 16th century. When the age of steam rolled around in 1770 offering unprecedented transportation opportunities, the Fuchs (Fox) Mining Company was quickly founded, buying up the small Fox Hill mines and digging the ‘Fox Adit’ (Fuchsstolle in German or Sztolnia Lisia in Polish), a flooded entry tunnel which allowed coal to be easily transported out via boat - an impressive feat at the time. The Fuchsstolle was a fancy affair - with entertainment being what it was in this very provincial area, authorities decided that a good draw for prominent visitors and patients resting in the city’s Old Water sanatorium (now no longer in existence due to severe mining damage) would be boat excursions complete with flowers, a live orchestra, and festive banquets organised in a handsomely illuminated underground cavern. Famous guests included Frederick William III of Prussia, Princess Izabela Czantoryska, Princess Charlotte of Russia, and even future POTUS John Quincy Adams, who held the diplomatic post of ‘American Minister at Berlin’ in 1801 and was being taken around Silesia by Prussian officials eager to get out of the office.

By the late 1980s, 20,000 people were employed in Wałbrzych mines, but the industry was shut down completely after the fall of communism, due to low profit margins and risky working conditions. In consequence, unemployment soared and major financial struggles began for Lower Silesia’s ‘2nd city.’ Recent efforts to revive Wałbrzych’s cultural life and celebrate its industrial heritage have brought about the 2014 unveiling of the Old Mine Science & Art Centre, an impressively modern museum located in the former Julia mine complex. Though its creation put the town in considerable debt - a move heavily criticised by some citizens - the result is remarkable to say the least, and features an art gallery, exhibition of mining paraphernalia, the “ecology tower”, and restored structures including a machine room, underground adit, headframe, and workshop.

The current epicentre of gold train kitsch (gold train beer, anyone? How about gold train ice cream?), for a long time Książ Castle was - and probably still is - the area’s main draw. Its history dates all the way back to the end of the 13th century, when the original structure was built by Bolko I the Strict, Duke of Świdnica and Jawor. However, it is best known as the fiefdom of the Hochberg family, who purchased it in 1509 and owned it until 1941.

The last of the Hochbergs to reside in the castle was Mary Theresa Olivia Hochberg von Pless, better known as Princess Daisy. Wife of Hans Heinrich XV von Hochberg and a social butterfly renowned for her beauty, she frequently hosted prestigious guests from Europe’s most influential houses, making the estate come alive with lavish parties, hunting trips, and other upper-class diversions. Life soon turned sour for the princess, however: a worsening medical condition (possibly multiple sclerosis), marital problems resulting in a 1922 divorce, accusations of espionage from the Prussian press following her visit to a WWI POW camp, and significant financial problems eventually saw Daisy living relatively impoverished and alone. The castle itself was seized by the Nazis in 1941 to be converted into one of the Führer’s quarters. Much of the estate’s historic decor was destroyed during this time; a shelter and two levels of tunnels were built underground as part of Hitler’s Project Riese (‘Giant’), a secretive operation which involved the building of a network of tunnels underneath Lower Silesia’s Owl Mountains.

Książ was plundered by the advancing Red Army and neglected until 1974, when restoration works finally began. Much of the castle is now open to visitors, but it would be a stretch to say it has been restored to its former glory - a certain commie-esque vibe still lingers around the place and criss-crossing groups of visitors are hurried along impatiently by guides rattling off historical details at a mile a minute. A visit is still certainly worthwhile, and if you make the trip, just go with the flow and remember that this is an Eastern European experience which is getting rarer to come by.

Getting to Wałbrzych is as easy as hopping on a train at Wrocław Main Station; trains run at least once per hour and the trip takes between 55 minutes and 1h15. Keep on your toes as the train approaches Wałbrzych, as there are four different stations, and distances between them are considerable. Get off at Wałbrzych Fabryczny station for the shortest walk to the main square (1.3 km) and the Old Mine Centre; miss the stop and you’re in for an hour-long hike from the Wałbrzych Główny station. To reach Książ Castle, get on bus 8 at Wałbrzych Miasto station and get off at ‘Książ Castle’ (easy enough), or shell out up to 30zł for a taxi.

Top Places to Visit in Wałbrzych

ul. Piastów Śląskich 1, Wałbrzych
featured
/wroclaw/ksiaz-castle_76476v
Legend has it that the original castle at Książ was built at the end of the 13th century by Bolko I, Duke of Świdnica and Jawor, but it is best known as the …
see more
Featured
Wałbrzych

Museum of Porcelain in Wałbrzych