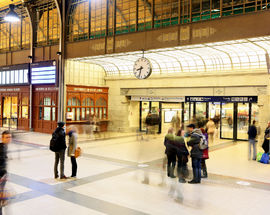 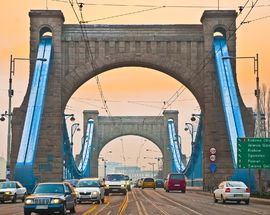 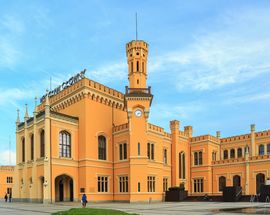 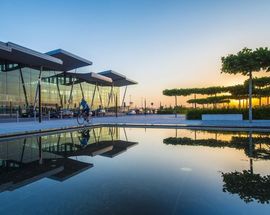 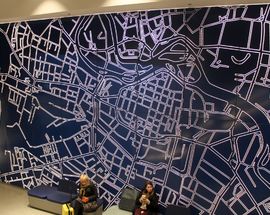 Wrocław is on the up and up as regards transport. Served by it's own airport (with a new 3-storey terminal) only 13km from the city centre, a gorgeous, recently-modernised train station and one of the country's only major highways connecting it to Berlin to the west and Kraków to the east, it's never been easier to get to or from Wrocław. Several trains depart to Germany and Czech Republic each day, the city is a hub for Polski Bus, and also boasts a comprehensive and easy to use tram system. In this section you'll find all you'll need to know about getting to and getting around Wrocław.

Wrocław can boast one of Poland's most efficient and modern airports, thanks to the shiny new terminal built a few hundred metres from the old one and opened in March 2012. Completed ahead of the Euro 2012 Football Championships, the new terminal can handle over 3 million passengers annually and is Ryanair’s first hub in Poland.

Wrocław is well-designed for train travel, boasting a gloriously renovated main train station that was at one time the largest in Europe. Fully modernised in 2012 before the Euro Cup, today Wrocław's Dworzec Główny is arguably the nicest train station in Poland, making a wonderful impression on all those who arrive via the rails. Located approximately 1.5km south of the market square, from here it is possible to catch quick domestic connections to Kraków (3.5hrs), Warsaw (4hrs), and Poznań (2.5hrs), but international destinations like Berlin and Prague usually require a changing of trains. Miłej podróży!

One of central Wrocław’s most impressive structures is no doubt its main train station, whose flamboyant Neo-Gothic facade full of turrets and crenellations more resembles a 19th century palace than a modern transportation complex. Originally built in the years 1855–1857 to form the starting point of the Oberschlesische Eisenbahn (Upper Silesian Railway), the station was the design of Royal Prussian architect Wilhelm Grapow, and despite having only one platform it was still regarded as the biggest station in Europe. When it first opened the station stood afield from the rest of urban Breslau (as the German city was then known), flanked by a lake and a Jewish cemetery. However, as the city grew so did the need for more trains, and by 1904 five new platforms had been added. This era marked a golden age for the city, though calamity was never far away – the flood of 1903 devastated the area, with surviving postcards from the period depicting people rowing boats past the station. During WWII air raid shelters were built underneath the car park in front of the station, with the surviving catacombs later utilised by shops selling cheap clothes and pornography.

Somewhat surprisingly, the station is best known for its connection to Polish cinema. It was here on Platform 3 that popular cult actor Zbigniew Cybulski (aka 'The Polish James Dean') died while trying to jump onto a moving train bound for Warsaw. Today a commemorative plaque unveiled by director Andrzej Wajda on January 8, 1997 - the 30th anniversary of the event - can be seen on the floor of the busy platform. For decades the station was also famous for its small cinema – allegedly the last train station cinema in Europe. Operating without interruption from 1947 until December 2009, the tiny Kino Dworcowe was open around-the-clock, attracting an estimated seven million viewers (among them Cybulski) during its life span. By 2002 declining audience figures led the proprietors to try projecting erotica, though even this failed to stimulate sales. A last gasp attempt to save the cinema was made in 2005, when in a sudden U-turn the owners opted for an edgy, alternative repertoire showing underground films from the Łódź Film School. The results were far from overwhelming, yet the historic site was kept running until the recent renovation of the station, which brought its streak to an end after 62 years. While the idea of reopening a cinema in Wrocław’s train station hasn’t been completely given up on, there is no current plan for such in place.

While railway station modernisation projects in Poland’s other major cities (Warsaw, Kraków, Katowice) have seemingly turned their stations into soulless shopping malls, Wrocław’s station has retained its original design, which in the exciting build-up to Euro 2012 was completely restored and enhanced to be handicap-accessible, including lifts, escalators and luggage belts leading to the platforms. The space in front of the station was transformed from a parking lot and gas station into a green public square with two fountains and plenty of benches. With space for comfortable amenities like waiting rooms, restaurants, shops and cafes, the result is nothing less than modern Poland’s most magnificent train station.

While Wrocław's bus station (Dworzec Centralny PKS) gets a much-needed renovation, international and domestic buses will arrive and depart from the back of the old transportation building nearby at ul. Joannitów 13, which will serve as a temporary bus station until the work is complete. Located immediately behind the railway station, the temporary station is well-marked, and the changes shouldn't cause travellers much inconvenience or confusion; in fact the temporary station is already an improvement over the former station in our opinion.

In addition to being a stop on the Eurolines international coach network, Wrocław is also a hub for Polski Bus (polskibus.com), with regular connections to Kraków, Prague, Łódź, and Warsaw.

Poland is one of Europe’s leading nations in road fatalities, a statistic that will surprise few who have had the pleasure of using the roads here. A lethal combination of poor road surfaces, networks unsuited to the volume of different traffic, and, most of all, aggressive driver behaviour result in the common sight of mangled wrecks around the country. Exercise caution, keep a safe distance from the vehicle in front, rub those rosary beads, and God speed.

The speed limit in Poland is generally 50km/hr in cities (60km/hr between 23:00 and 05:00), 90km/hr outside urban areas, 120km/hr on dual carriageways, and 140km/hr on motorways. All cars must have their headlights switched on at all times and carry a red warning triangle, first aid kit, replacement bulbs, a national identity sticker, and proper registration and insurance documents. Poland also has strict drunk-driving laws: 0.2‰ is the maximum blood/alcohol limit, so forget about having even a single beer. EU citizens may use their home driving licences as long as they are valid (and you have it on you when driving), however citizens of countries that didn't ratify the Vienna Convention (tsk, tsk, Australia and America) will find their licences technically invalid (though this has never been a problem for anyone we know).

One of the only major highways in the country, the A4 connects Wrocław with Berlin (via Legnica) and Kraków (via Opole and Katowice). Much of Wrocław’s centre is pedestrianised, meanwhile one-way and seemingly accessible streets that are actually only available to permit holders make driving in the centre an absolute nightmare. Poor planning and limited traffic patterns mean congestion is a major, major problem as well; call a cab and it might take as much as twenty minutes to get to you, though it's only a few blocks away. As such, we suggest you ditch your vehicle at the first opportunity, which raises the question of where to put it.

Free parking is basically non-existent, though some hotels have limited parking spaces; check when booking your room. For street parking you'll easily recognise the universal large blue 'P' sign, but be aware that a blue circle with a red 'X' over it means 'No Parking' (not sure which universe that sign is from). Pay via the automated ticket machines; in the city centre it's 3zł for the first hour, 3.60zł for the second hour, and 4.30zł for the third. Thereafter you’ll be forking out 3zł an hour.