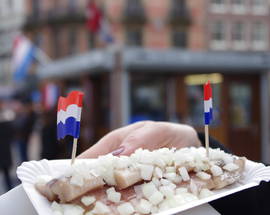 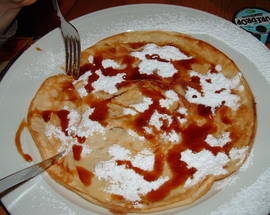 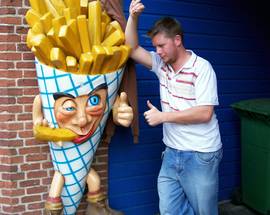 Dutch cuisine has a long and interesting history and includes everything from hearty family meals to the lightest of pastries. But let's face it. The Netherlands isn't really known for its food. In fact, it has built quite a reputation for stodgy fare. Perhaps this is due to the abundance of heavy potato-based dishes in the Dutch diet.

Actually, the Dutch can only blame themselves for their bland cuisine, which is ironic when you consider that they ruled the spice trade for a 100 years. In fact, they cooked some very exciting dishes until the beginning of the 19th century when frugality became fashionable. You only have to look at the stunning old Dutch still lifes to see that there was a lot of passion for great food in Holland and a desire to flaunt it. These still lifes were even called pronk pieces (to pronk means to show off). After its heyday in the 17th century, the Netherlands lost many of its colonial possessions to the British in the Anglo-Dutch wars. This loss of wealth, coupled with a growing population that put pressure on natural resources, meant that most people had to tighten their belts. They simply couldn't afford to eat such a wide variety of foods any longer.

The most popular Dutch cookbook in the 19th century was called Aaltje, die volmaakte en zuinige keukenmeid, (Aaltje, the perfect, frugal kitchen maid). While this book wasn't quite as frugal as its title, it set the tone for what was to follow. Towards the turn of the 20th century, the trend was to send Dutch girls to huishoudschool (a kind of domestic science school). Here efficiency was drilled into them. Needless to say, all the passion went out of Dutch cooking at that point and many traditional family recipes were lost.

While it's true that meat and two veggies are considered the holy trinity of their cooking, the Dutch have a rather healthy diet compared to other Western nations. Many Dutch meals rely heavily on vegetables and legumes. Moreover, Dutch cooking is straight-forward, easy to make, cheap and nutritious, so it ain't all bad. Of course, we're not talking about deep-fried frikandel here.

Luckily, the tide is finally turning. Many Dutch chefs are rediscovering traditional dishes and local ingredients and giving them their own twist. There are also so many Dutch TV cooking shows nowadays that it's almost irritating. All of these developments are a clear sign that people are starting to become interested again in the Netherlands' lost culinary history and are exploring the abundance of local and regional dishes.

Brown bean soup
The Dutch are renowned for hearty soups that are packed with flavour. A meal in themselves, these soups will keep you going for a while. A Dutch dietary staple, brown bean soup, or bruine bonen soep is nutritious, filling and a cinch to make. A great mid-week meal for the whole family, it goes great with buttered brown bread.
Ingredients:
•5 oz. smoked bacon, cubed (145 g)
•1 tbsp butter
•5 shallots, chopped
•1 large carrot, diced
•1 large leek, sliced in rings
•1 tbsp ground paprika
•3 lb. canned brown beans or pinto beans, drained and rinsed (1.3 kg)
•12 oz. tomato puree (375 ml)
•3 cups beef stock (500 ml)
•2 bay leaves (fresh or dried)
•Salt, pepper and soy sauce or Worcester sauce, to taste
•1/2 cup chopped celery leaves
Preparation:
In a large soup pot, fry the bacon in the butter. Add the shallots, carrot, leek and the ground paprika. Mix well. Now add the beans, tomato puree, stock and bay leaves. Bring the soup to a boil and then turn down the heat to simmer for 15 minutes. Remove the bay leaves. Season to taste with salt, pepper and soy sauce (or Worcester sauce) and then blitz the soup half smooth, using a blender or food processor. The soup should still have texture and not be completely smooth. Add the celery leaves right before serving. Serves four.
Dutch

Nieuwezijds Voorburgwal 105
/Amsterdam/Oud-Holland_96598v
Housed in a 17th-century building, whose once impressive façade is now marred by a glass addition, Oud Holland is a traditional restaurant that probably looked …
see more
Dutch

Singel 415
/Amsterdam/t-Lieverdje_92896v
This unpretentious café and bar named after a famous statue of a small boy located around the corner serves up classic homemade Dutch dishes like stamppot, …
see more
Diners

Singel 540
/Amsterdam/Amarylles_92816v
Located on the same canal as the Flower Market, this small café offers a little bit of everything from full English breakfasts around the €10 mark and …
see more