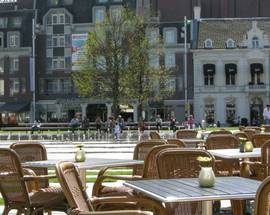 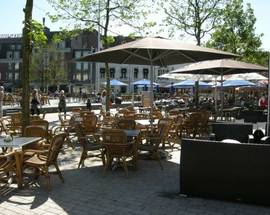 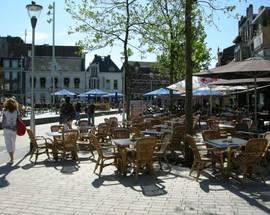 De Heuvel is the central square in Tilburg and the most important shopping street, de Heuvelstraat, leads up to it. In 1419 ‘den Hoevel’ was named for the first time. Until the water tower on Bredaseweg was built in 1898, Tilburgers could only get water from de Heuvel as it was the only place with a water pump. A replica of this pump can still be found on the Oude Markt. Until 1994 the square boasted an old lime tree, but despite major protests, the dead tree was finally uprooted. Wood from the tree has since been used to create the mayor’s gavel and in a tableau in the city hall. The square was completely rebuilt in 2008 and three descendants of the old lime tree were planted in prominent places in the middle of the square. De Heuvel also boasts a statue of King William II, who proudly looks over the city he loved so much.

Cause Tilburg is not that big, sooner or later you always end up here. And although the square lacks atmosphere, the square and adjoining streets are filled with good bars and pubs. What i also liked is that prices for a beer on the main square were almost the same as in the sidestreets. So no tourist ripp offs here!
Take your guide with you Download a pdf