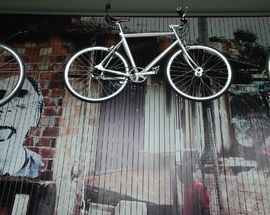 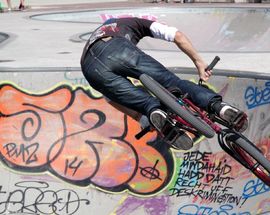 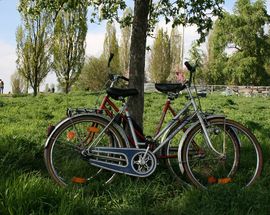 While we don’t want to count our chickens before they hatch, we’re fairly confident in proclaiming the end of winter. Hurray! The weather is improving, the sun is growing ever confident and the days are getting longer, meaning we can finally bring our bikes out of hibernation and enjoy beautiful Berlin on two wheels. Is Berlin a good city for cyclists? We’re obviously biased, but the answer to that question is a resounding ‘yes’.

As far as big cities go, few are as amenable to bicycles as Berlin. The city is flat and well-organised, with no natural hills and almost 1000km of bike lanes. There are even a number of streets where bikes are king, with a 30km/h speed limit on any motorised vehicle. Around half a million people cycle in and around Berlin every single day, and it isn’t difficult to see why.
We’re not going to tell you that Berlin is a cycling paradise, because that would be a lie. The sheer amount of traffic in the city causes nerves and issues, and it can often seem like there is an eternal war going on between angry motorists and over-confident cyclists. We’re not experts, but we can only see one winner in a head-on battle between car and bike. Common sense is required when cycling in Berlin, unless you are planning on making a trip to the hospital/morgue.

But the positives far outweigh the negatives, and cycling is a magnificent way to enjoy the capital at your own pace. So, what do you need to know about biking in Berlin? Here are a few tips and hints.

Don’t Be An Idiot
The first and most important rule of biking in Berlin is the simplest — don’t be an idiot. Wear your helmet at all times, make sure your lights are functioning, and don’t try any wacky business. There is a thin line between a bicycle stunt going viral and a grieving family, so don’t walk it. Use your common space and respect the road.

Lanes, Not Lanes, Kinda Lanes
Bike lanes in Berlin are usually marked with the international cycling sign, and those separated by white lines are mandatory. Other lanes are marked in red, although most of these are in need of a touch up as the paint is best described as tired, which can often lead to some heated exchanges between cyclists and pedestrians who aren’t aware of where they are. Do be aware that some of the lanes on the streets tend to end all of a sudden, causing much confusion and consternation.

Hotel and Street Rentals
Most hotels (those with their head screwed on, at least) will have a bike rental partner, often times for free, so don’t be afraid to ask about it at reception. The city is also full of street kiosks offering bike rental, with prices ranging from €5 to €12, with somewhere in the middle proving average. The bikes aren’t the best on the planet, but they’ll do the job for a day of sightseeing.

App-Based Rentals
The world is moving ever more digital and bike rental in Berlin is not getting left behind. There are a number of apps available that let you rent a pedaller for the day or longer. Deezer is the biggest and offers 30 minutes free. Donkey Bike and Lime are also worth checking out, while Call a Bike is the city’s official bike rental app (ran by Deutsche Bahn).

Big Name Rentals and Tours
Biking in Berlin isn’t exactly new, so it isn’t surprising to find a bevvy of big names plying their trade in the cycling world. Fat Tire Tours is regarded as one of the finest bike tours on the planet, with Berlin and Bike and Berlin on Bike not far behind. Some more creative names wouldn’t go amiss. Swapfiets is also an option for those looking to rent a bike over a longer period of time.

Something A Little Different…
If you’re looking for something decidedly wacky (and very German), there are a number of unorthodox bike tours in Berlin. The Funbike tours take place on a four-wheel, seven-seater contraption, while the BierBike is exactly what it sounds like. The Berlin BigBike is much the same, allowing groups to booze and cycle through the day. Berlin Rikscha Tours are also a great option for those who want the joy of a cycling tour without all that exhausting peddling.