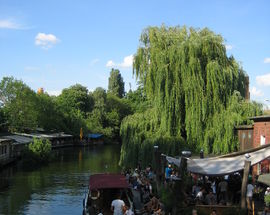 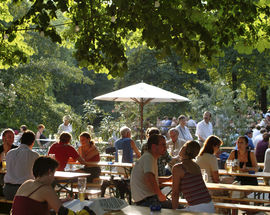 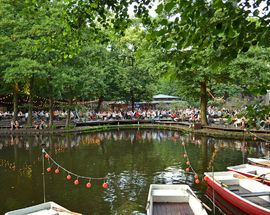 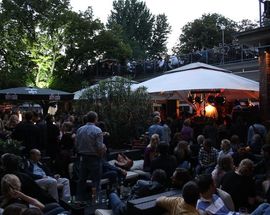 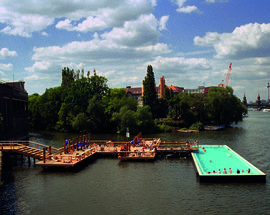 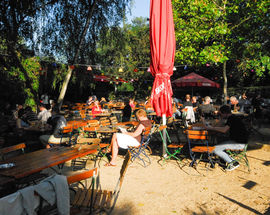 Is there anything more delightful than an evening spent in a beautiful beer garden? That is a rhetorical question, of course there isn’t, of course not. Berlin is a city of magnificent views and even more magnificent beer, and the two come together like magnet and steel, like lemon and lime, like bacon and anything etc etc. There are no shortage of beer gardens in the German capital and almost all are worth a look, but we’re not about to leave you in the lurch. These are our favourites, which we can confidently say after years of ‘hard’ research. Prost!

The most gruesome end you'll meet at this Biergarten at the southwest end of Viktoriapark is the sunrise. Those watching their melanoma sit under the red umbrellas near the table-football and grill, while sunbathers go to the rooftop for a view of the playground and football field. DJ music begins most nights at 22:00 inside on the small dance floor.

Berlin's oldest Biergarten has been serving cold ones below the chestnut trees since 1837. See if any of the 600 seats are free before queuing up for a glass of reasonably good Praterbier. The adjacent Gaststätte restaurant is open year-round and has traditional Berliner food and seasonal specialities.

Set on a boat straight out of the 1920s (literally), Club Der Visionaere is a little bit more than your standard club. There isn’t a huge amount of space but that’s how we like it, and the deck is about as idyllic as boozing in Berlin gets during the warmer months. With a can’t-be-beat spot between Kreuzberg and Treptower Park, Club Der Visionaere is in for another busy summer.

You are guaranteed great food and drink - this is a brewery after all, and the beer is fantastic, all brewed right here on the premises. Their dark beer with malt is really rather good. It's a great setting too: a quiet, leafy courtyard off the main street.

Wedged between a canal lock, the zoo and Tiergarten park, this is a great spot to spend a few hours. Chairs are easy to manoeuvre for optimal sunning, and anything off the small daily menu is a safe bet. Inside, the Krug is modern diner chic.

The perfect Berlin biathlon is riding a bike through Tiergarten park, rehydrating with beer here, and then renting a rowboat on the adjacent lake. This café, restaurant and bar serves a breakfast of champions until 16:00 as well as regional food, coffee, cakes and cocktails. Food served till 22:00.

Berlin's funkiest bathing destination is the hull of a container ship in the Spree River with an open-air bar and beach area next to it. It pays homage to the time when Berlin had 15 such bathing facilities along the river at the turn of the 20th century. Closed in winter, after April it's wide open to 360° views of the river and city. Bring your inflatables if you're not a good swimmer – the 325-square-meter heated pool is over two metres deep. Massages, towels and flip-flops are available.

The large Biergarten around the former US officer's casino in Tempelhofer Freiheit park has Bavarian beer, tables beneath the chestnut trees and deckchairs in the sun. Drop by for the American barbeque, large hamburgers and other international food. The perfect mix of a Berlin summer and the undeniably engaging world of American BBQ excellence.