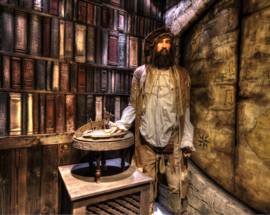 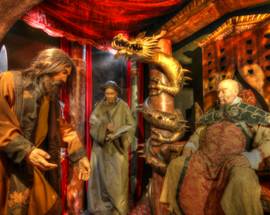 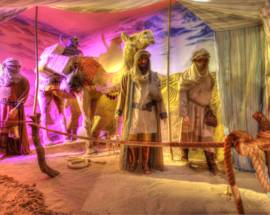 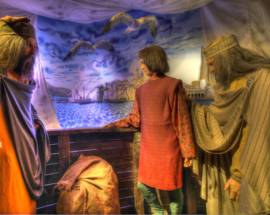 The name Marco Polo is synonymous with travel and adventure. While he is undoubtedly one of the greatest characters from history, some details of his life remain a mystery. For example, it is acknowledged that the great adventurer was born in the year 1254 but it is not known exactly where. Written evidence show that the Polo family lived on the island of Korčula in the 15th century, and Venetian historical records from the same time confirm that the Polo family name has its roots in Dalmatia. Confusion on the exact place of his birth is somewhat understandable since the Republic of Venice at the time encompassed much of the land which now occupies modern Dalmatia, including the island of Korčula. So, with Venice as the most powerful economic force from the 12th to the 18th century, it was not uncommon for many families from Dalmatia to move to and settle in the town of Venice — as did the Polo family after Marco’s
birth.

Marco Polo’s chronicles to the Far East began in 1271 when he took up the mercantile family business with his father Nicola and his uncle Mateo. Although Marco’s father and uncle had made the journey before, they reached the summer residence of their patron Kublai Khan in Shangdu four years later in 1275. Marco became an envoy and special advisor in the service of the great Mongolian ruler for 17 years. His extensive travels throughout Asia enabled him get a picture of the different cultures, traditions, and even the geographical layout of the majority of the
Asian continent. Marco’s time in Asia came to an end, and his long way back home began, when he agreed to travel to the western reaches of the Mongolian empire in order to accompany a Mongolian princess to Persia.

Marco Polo’s mark on history came out of the ashes of one of the largest and bloodiest naval battles the world had ever seen. On September 7th, 1298 the Republics of Genoa and Venice - two of the middle ages’ bitterest rivals - waged war on the Adriatic sea between the Pelješac
peninsula and the northeastern edge of the island of Korčula. Although the battle took place in the heart of Venice’s Dalmatian territory, Genoa and their enormous flotilla emerged victorious. With Marko Polo having been a Venetian - and therefore on losing side - the wounded Marko Polo
was captured and taken prisoner along with hundreds of others. After three days of captivity in a tower on the island (which is still around today) Marco was taken to Genoa where he spent nearly a year languishing behind bars. As luck would have it, Polo shared his cell with a romantic writer named Rustichello da Pisa. After months of dictating the details of his adventures to Rustichello, “The Book of the Marvels of the World”, also known by its Italian title “Il Milione”, was completed. Even during Polo’s lifetime the book was an enormous hit and his descriptions of the
animals, customs and geography of the Far East became basis for all subsequent works on the subject for centuries to come. He is credited today with introducing Europe to the concept of paper money, the number ‘million’, the use of coal as fuel, and perhaps even eyeglasses. Marco
Polo’s indelible mark on history continues to be felt today, as his book is the third most read in the history of mankind - behind only the Bible and the Quran.

The Travels of Marco Polo was a source of inspiration for the other great naval powers of the time, including Spain and Portugal. Many countless adventurers struck out into the unknown for a chance to glimpse what Polo had described in his book; the most famous of which was Christopher Columbus. During Columbus’ attempt to forge a direct route to the trading ports of the Far East - by actually travelling west - he encountered the Americas, and the world was changed forever. It is also know that Columbus kept a well-worn copy of Polo’s book with him
on his repeated journeys to the Americas and used it as a reference point to help him describe the fantastic scenes he taking in.

By all accounts and purposes, Marco Polo returned to Venice in 1295 as a very wealthy man, after his more than two decades in Asia. Following his release from prison in Genoa and the publication of his book, by 1300 Polo was working again with his father and uncle as a successful merchant. His marriage to Donata Badoer, a Venetian noblewoman, bore him three daughters: Fantina, Bellela and Moretta. Polo fell ill 1323 and remained bedridden until his death on January 8th of the following year. His last will and testament was executed by his family, as his large sums of wealth and property were distributed. A portion went to the San Lorenzo convent in the city of Venice where his remains are kept today. It is also said that Polo set free the Tatar slave who accompanied him during his travels in Asia.

The number million is said to have been taken from Marco Polo’s middle name ‘Emilio’. While his impact on the world of his day and modern times is undeniable, several contemporaries and historians argue that the accounts in his book were grossly exaggerated. So in order to keep pace with the incredible descriptions in his book, normal numbers were inadequate, therefore 1, 000, 000 came into use.

A sailing clipper, christened “Marco Polo”, built in Saint John, Canada in 1851 became the fastest ship in the world by sailing around the globe in less than six months.

Be sure to visit the island of Korčula this summer and experience the life and times of Marco Polo first-hand during the Marco Polo Fest, held from the 14th to the 17th of July.

The Rough and the Smooth of Croatian Rakija feature
Croatian Inventors: Great Minds from a Small Country feature
Did you know? feature
see more