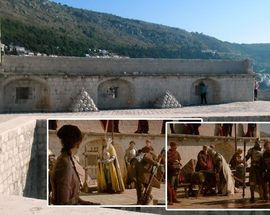 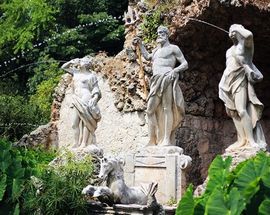 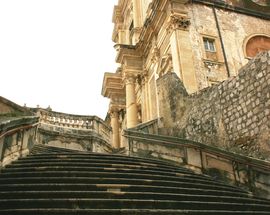 Game of Thrones needs no introduction to anyone. A fantasy epic that redefined the standards that must be met by any aspiring producer. That much of it was filmed in Croatia too is no great secret. But where exactly do you need to go to stand on the walls of the Red Keep, to retrace Cersei’s walk of shame?

“Aegon built his castle of red rock to remind people of the fire he roasted his enemies in, so whenever King's Landing looked up they'd see the price of defiance.”
This is perhaps one of the more memorable locations of the show. It’s where Ned Stark was separated from his head after all, essentially sparking off several seasons of warfare. Of course, this incident took place in Season One, which wasn’t filmed in Croatia, but the Red Keep we now know, or at least its walls, was filmed in Dubrovnik’s Lovrijenac Fortress.
The fortress itself was constructed in response to threat of invasion by Venice. Essentially just walls to begin with, to fool the approaching navy, the sea facing fortifications are up to 12 metres thick, but a mere 60 centimetres thin facing the city of Dubrovnik. This was felt necessary, so that it could never be held by an opposing army.
There are some few scenes that use Dubrovnik’s West Walls, most notably as a practice yard where various sword-related activities could be seen over several seasons.

“Growing Strong.” Ha! The dullest words of any House - Olenna Tyrell
With the introduction of House Tyrell to the show in Season Three, we were blessed with Diana Rigg’s Queen of Thorns. Many of her appearances would be private conversations, held in the Red Keep’s gardens for purposes of increased privacy. The gardens themselves are in fact Trsteno Arboretum, found some 20 plus kilometres outside of Dubrovnik itself. Covering 25 hectares, this was built in the late 1400s, as summer residence for the Gučetić-Gozze family. Insofar as CGI goes, there wasn’t much need for any here, as it looks every bit impressive in real life as it does on the small screen.

The City of Qarth

Qarth, home to the Pureborn, those who would claim Daenerys Targaryen’s trio of firebreathing dragons. In truth, this is Lokrum, a 72 hectare island a mere 600 metres off the coast. While not exactly mystical, the island does have several ancient buildings worth visiting, including Fort Royal Castle and a Benedictine monastery, the latter abandoned shortly after the French Revolution, and which would become the site on which Maximillian Ferdinand would build his summer residence. Maximillian Ferdinand of course was Archduke Franz Ferdinand’s uncle. The Austrian nobleman also introduced peacocks to the island, and today these can be seen all around the island, now a Nature Reserve and Special Forest Vegetation Reserve.
Some parts of Qarth were filmed back on the mainland, using parts of the Rector’s Palace, which was built in the 15th century for the rector who governed Dubrovnik at the time. Minčeta Tower too found itself transported to Qarth, specifically the base of the tower, doubling as the House of Undying. The tower itself faces landward and is regarded as the symbol of the city itself.

“Growing up at Winterfell, all I ever wanted was to escape, to come here, to the capital. To see the southern knights and their painted armor, and King's Landing after dark. All the candles burning in all those windows...”
The capital of Westeros wraps up our look at Game of Thrones. You’d be surprised how many scenes and locations were represented on screen when using only a few spots within the former Ragusa. Key amongst them is Cersei’s walk of shame from Season Five. This took place on the Jesuit Staircase, onto St. Dominic Street where you would also have seen Jonathan Pryce’s High Sparrow preaching. Of course Lena Headley used a body double for this scene, and rumours persist that the scene was rewritten at the last minute because local religious leaders objected to the notion of a naked woman present in any of their buildings.

/dubrovnik/lokrum-island_5846v
You don’t have to travel far to experience the tranquillity of island life: The island of Lokrum is a mere 15 minute boat cruise. It’s one of the best spots …
see more
Essential Dubrovnik

Pred Dvorom 3
/dubrovnik/the-rectors-palace_5766v
One of the loveliest buildings in the city and the seat of the Rector, the figurehead of the Republic elected within the nobility, whose term lasted for just …
see more
Trsteno

Potok 20, Trsteno, Zaton Veliki
/dubrovnik/arboretum-trsteno_150884v
If you’re on the edge of your nerves and even a stay in Dubrovnik brings no respite to your soul, it’s time to go green, get back to nature and indulge in a …
see more
Essential Dubrovnik

EDITOR'S PICK
/dubrovnik/the-city-walls-bastions-and-pile-ploce-gates_5761v
Almost two kilometres in length, Dubrovnik’s city walls are among the best preserved and most attractive on this planet, and a walk along them is an absolute …
see more
Editor's pick