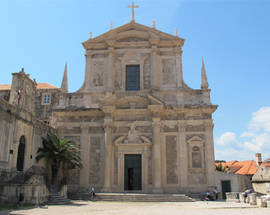 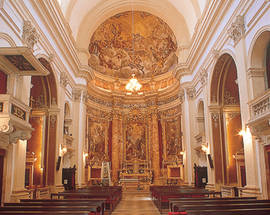 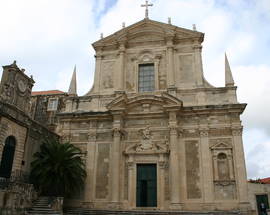 Part of a fine complex on an elevated square close to the southern edge of the Old Town, the wonderfully ornate Jesuit church of St Ignatius is approached via a romantic baroque staircase which is modelled on the Spanish Steps in Rome (1738). The church itself was built between 1667
and 1725 by architect Andrea Pozzo, and like most Jesuit churches of the period was modelled on the Gesù in Rome, the mother church of the Jesuits. Both the stairway and the square in front of the church are used as venues at the Dubrovnik Summer Festival. Despite the somewhat
run-down appearance of the adjoining college, an esteemed place of education, this is a particularly atmospheric spot in one of the oldest parts of the city. By the end of September Mass in English is held on Sundays at 11:00.

On the 23rd of May 2011 my son Anthony is getting married jn this church and my husband Bob and I are really looking forward to seeing what it is like.
13.02.2009
Arne

I have seen many churches but this is the most beautyful of them all. The Jesuit church of Dubrovnik shold been availible on the youtube!My family was in Dubrovnik 1990, I was lucky to have a day of my own, and the Jesuit church happende to be open that day. When I saw the interior (have been in Dubr. many times before 1990)I felt how it must be like in heaven.. So beautiful altar an dome above it.. An experiance from the world to come, I will never forget. Hope soon to go to Dubrovnik again.
Take your guide with you Download a pdf