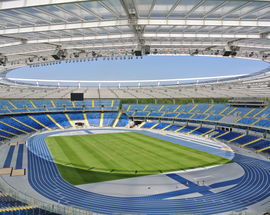 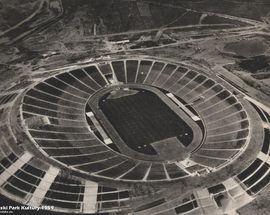 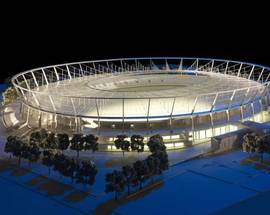 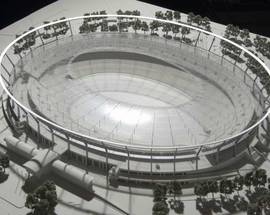 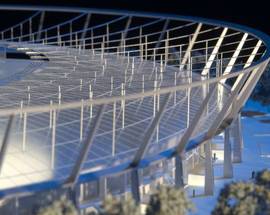 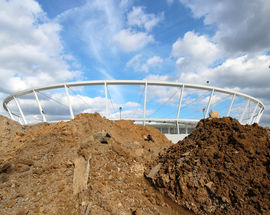 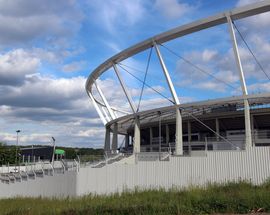 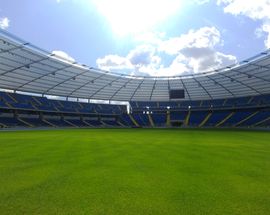 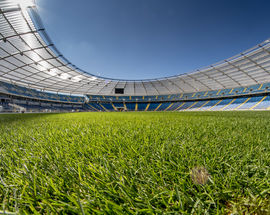 October 2017 marked a very important milestone in Silesia. Stadion Śląski (Silesian Stadium), the scene of so much sporting history, finally re-opened, and not a moment too soon! The modernisation process, which began in 2009 and lasted 8 years was finally over! There were times when the work looked shaky, like it may come to a halt and never be completed. But this is Stadion Śląski. It could never be allowed to fail.

Strong words for what is, essentially, just a sports ground. But this isn't any ole sports ground; there is emotion, history and politics spanning decades tied to this site. It is also a place where legends of football have played, ranging from Johan Cruyff, George Best and Cristiano Ronaldo, teams like FC Barcelona, Bayern Munich and the last European team visit in 2000 by Inter Milan. To understand why this place is not only important to Silesians, but Poles alike, we need to delve back, like all good stories, to the very beginning...

Following the firestorm of destruction unleashed by WWII, post-war Poland resembled a giant brickyard as the nation set about rebuilding itself. 1950 saw the decision undertaken to build the Silesian Stadium in Chorzów as part of an ambitious public space project, the Park of Culture & Recreation (one of the largest parks in Europe!) and Julian Brzuchowski got the job of designing the socialist realist monstrosity. Construction began in 1951 with many keen patriots volunteering to work on the project for free. Despite this, it still took a government outlay of 1.5 million złoty (a staggering amount at the time) to complete it.

Open with much propagandist fanfare as a symbol of Poland's post-war 'rebirth' in 1956, this Socialist Realist behemoth built out of red and white sandstone, granite and, of course, concrete has been the region's premier sports arena for decades. The opening match was scheduled against East Germany on 22 July 1956 and designated ‘Rebirth of Poland Day,’ a new communist holiday celebrating liberation from Nazi occupation. Festivities included a parade and an honorary flyover by three fighter planes, however, the Germans naturally ruined the day with a 2-0 win.

With an official capacity of 87,000, crowds regularly exceeded that figure thanks to plenty of standing room and in 1963 a record 120,000 squeezed in to watch visiting FK Austria Wien take on Górnik Zabrze. In 1993, Stadion Śląski became the official home of the Polish national team, thanks to the sorry state of the national stadium in Warsaw. Although for safety reasons capacity was reduced to 47,246, this remained the largest stadium in Poland, hosting speedway championships and other events, including massive concerts by bands like U2, ACDC, Iron Maiden and The Rolling Stones.

With a spate of newly planned stadiums to be built across Poland for the Euro 2012 football championships, Silesian Stadium's status diminished and it was decided the structure would undergo a damn thorough modernisation! Despite unveiling plans to modernise the Stadium and increase capacity to 55,000, Chorzów didn’t make the shortlist of host cities for Euro 2012, losing out to Gdańsk, Warsaw, Poznań and Wrocław.

From 2009, the stadium underwent modernisation which included the construction of a 43,000 square metre roof, new stands, lighting, video screens and an improved sound system. Other facilities include a restaurant, food vendors and VIP boxes, and the speedway track has been replaced with a traditional track that will allow Chorzów to host international athletics events. Though originally planned to be completed by autumn 2011 for 415 million złoty, the finishing touches were only completed in 2017 costing around 650 million złoty. And not without some drama too! In 2011, the construction of the ambitious roof design collapsed, which many feared would be the nail in the coffin for the project, however, with new plans in place, such is the importance of this stadium that the determination to complete the project was huge. Ruch Chorzów were originally interested in moving into this new abode, however, rent costs led to a slight change in plan... meaning they will, for the foreseeable future, continue to play their home games at their current stadium, which they too plan to modernise.

That's the rundown of the stadium, but now for the juicy stuff...

As often happens, football took on a more important political role in the stadium's history, when in a World Cup qualifier in October 1957 Poland (with 8 Silesians in the squad) beat the despised USSR 2-1 at a packed Stadion Śląski. Both goals were scored by Ruch’s Gerard Cieślik, who only learned he was playing the previous evening from the radio and had to take a day off from Huta Batory where he worked as turner. The victory was a great moment for the oppressed nation and the crowd’s enthusiasm was so great that they broke through militia cordons and celebrated in the showers with the players.

The next game of histrocial importance was in the 1969/70 football season, when Górnik Zabrze made it to the final of the European Cup Winner's Cup Final. They got there by drawing 3:3 on aggreagate with AS Roma, having drawn 2:2 in a thrilling match in Stadion Śląski, and again drawing in the 2nd leg, 1:1 in Strasburg. The final decision as to who went through to the final was decided by the toss of a coin! The coin which would decide the fate of each team was flicked up by the referee, eyes all around followed it with a skipped heartbeat, and when it settled, the arms of Górnik's players shot up in the air as they celebrated their advance into the final. The fine run to the final was, unfortunately, spoiled by Manchester City who beat Górnik 2:1 in Vienna. Despite this, the campagin is still fondly remembered in Silesia, and Poland!

To most non-Poles, most likely the game they may remember here took place on 6 June 1973, when Poland beat England for the first and only time in their history. The noise in the stadium was so loud that English commentators dubbed it the 'Witches' Cauldron.' The game ended in a 2:0 win for Poland, which later led to a 1:1 draw in Wembley, knocking England out and sending Poland to the World Cup 1974 in Germany. This campaign became legendary as Poland's fine form resulted in them coming 3rd, winning a silver medal. And it was all possible thanks to what happened in the Witches' Cauldron.

The stadium was also used for Speedway competition, and again, in 1973 - a truly good year for the stadium, it was here that the Individual Speedway World Championship final was won by Pole Jerzy Szczakiel (the first Pole to win, and to date, one of only two!).

Other memorable matches included a truly fantastic match against the Netherlands (one of the best teams in the world at the time) on 10 September 1975, which Poland won 4:1. Again, another night of European glory occurred on 11 October 2006 when Poland beat Portugal (whose team included a young Cristiano Ronaldo) 2:1, and was part of a succesful campaign to qualify for the European Championships in Austria/Switzerland 2008.

To date, the Polish national team have played 55 official games at Silesian Stadium, which 3 times led to World Cup qualification and once to the European Championships. And now, we look to the future, with the stadium now spick-and-span, ready to host football matches, athletics track and field events, concerts, and, as is planned for 2018, a speedway leg of the European Championships (a nice homage to the sport's connection to the stadium).

The stadium is now open for tours with full information and tour times available at stadionslaski.pl. We highly recommend a visit to this spiritual home of Silesian football!

ul. Katowicka 10, Chorzów
/katowice/silesian-stadium_96533v
Originally opened with much propagandist fanfare as a symbol of Poland's post-war 'rebirth' in 1956, this Social Realist behemoth was the region's premiere …
see more
Sport

ul. Cicha 6, Chorzów
/katowice/ruch-chorzow_72817v
14-times Polish champions, Ruch have had some tough years since their last title in 1989. Now playing in the second tier after finally being relegated from the …
see more