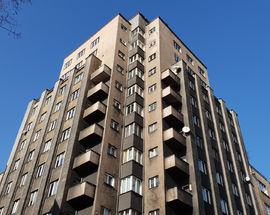 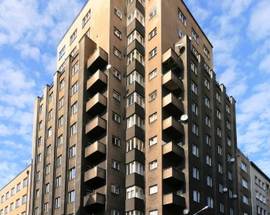 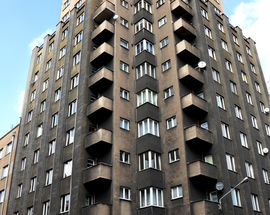 ‘Flying Saucer’ and ‘Cloud Scraper’: some of Katowice’s landmarks may be lacking a bit of colour but they certainly have colourful names. 'Drapacz Chmur' (its PL nickname) is another local icon whose beauty and relevance may have faded, but perhaps no building more represents the optimism of Silesia’s autonomous inter-war years. Although unimpressive by today’s standards and hardly even able to get its chin above the neighbours, this was the second skyscraper built in Poland. The work of architect Tadeusz Kozłowski and engineer Stefan Bryła, the structure was completed in 1934 following five years of work. Measuring 60 metres in height, it remained the tallest building in Poland until 1955 when it was surpassed by Warsaw’s monstrous Palace of Culture and Science. The steel-framed building was touted as 17 storeys (counting its three subterranean levels), and was one of the first in the country equipped with garbage chutes. As the tallest thing in town Cloud Scraper was used as a sniper station during the short-lived defence of Katowice against Nazi occupation. Though built during an era when decent design sense still prevailed, Cloud Scraper was well ahead of its time and today stands inconspicuously as a prime example of functionalist architecture. You can see the Cloud Scraper and many more examples of modernist style buildings in Katowice on the Modernist Architecture Trail.

/katowice/the-modernist-architecture-trail_158610v
This one's definitely for fans of architecture - take your kids on this trail at your own peril! The modernism movement was actually quite strong in Katowice during the interwar period of the 1920s and 30s, and beyond
see more