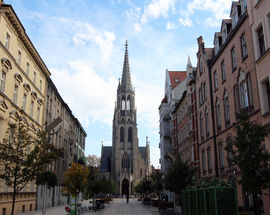 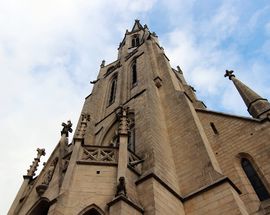 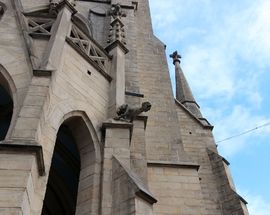 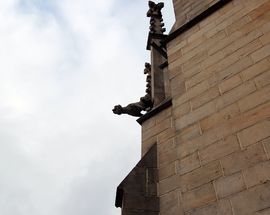 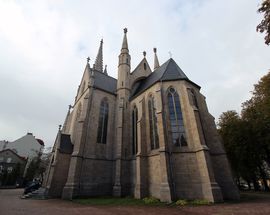 Katowice's oldest existing Catholic parish church was built from Silesian dolomite, not the usual red brick, between 1862 and 1870 to a design by the famous Breslau (Wrocław) architect Alexis Langer. Originally planned on a far grander scale than it was eventually built, the 43m-long, 31m-wide neo-Gothic building features an eye-catching, trademark Langer 71m octagonal tower and a feast of good things inside. The altar in the transept supposedly dates from the 15th century, whilst the wonderful stained glass windows on either side of the nave representing sin and virtue are the work of Adam Bunsch (1896-1969). The Chapel of the Holy Sacrament includes a likeness of Father Emil Szramek in traditional Silesian dress. Szramek was the parish priest from 1926 until his arrest by the Gestapo in April 1940. Sent to a number of concentration camps including Dachau, where he quickly became a spiritual leader for other incarcerated Silesian priests, he was murdered on January 13, 1942.

ul. Mariacka Tylna
EDITOR'S PICK
/katowice/ul-mariacka-tylna_153883v
For Katowice, ul. Mariacka Tylna ('Mariacka rear', which runs parallel to the main ul. Mariacka) is the Mecca of street art in the city.  Here, walking from one end to the other is like an outdoor art gallery, with walls on both sides of the street adorn
see more
Editor's pick

03.01.2023
Marc Vanic
Usa
My girlfriend is from Ukraine and last year we walking hand in hand in city centre and we came around the corner and immediately fell in love with Saint Mary’s church , i felt like i was home . It is a beautiful place in a beautiful country, i will be there january 23 , thank you
03.07.2017
Danusia

Between 1943 and 1945 mother and I worked at the rectory of this church. Mother was a slave laborer. I wonder if any of the priests or nuns are still alive.
Take your guide with you Download a pdf