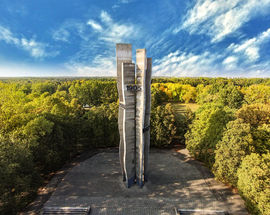 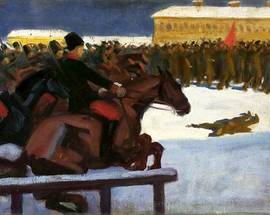 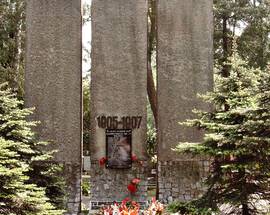 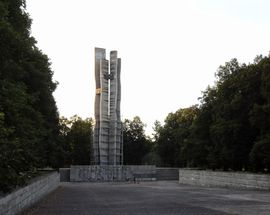 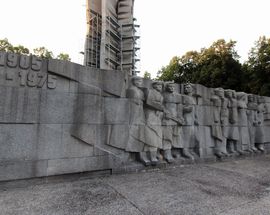 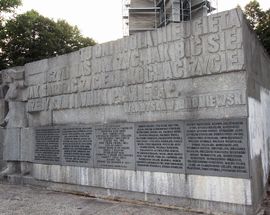 Mix a working class culture with a hatred for Imperial Russia and you get a volatile mix. So it proved in 1905, when the people of Łódź rose in rebellion against their Ruskie rulers. Russia’s disastrous military campaign against Japan in the Russo-Japanese War (won handily by Japan) had far-reaching consequences, battering an already fragile economy. Over 100,000 workers in occupied Poland found themselves laid off, and nowhere felt the pinch more than the factory city of Łódź. A wave of popular unrest spread across the entire Russian Empire (known as the 'Russian Revolution of 1905'), with relations between the authorities and the working class reaching a nadir when an estimated 1000 unarmed demonstrators in St. Petersburg were killed or injured on January 22nd, after being fired upon by Tsarist troops (the incident came to be known as 'Bloody Sunday').

By then workers in Łódź were already on strike, and over 400,000 workers had laid down their tools across the country, paralysing the economy and panicking the Russian authorities as the discontent evolved into street protests. Tensions finally exploded in June when Tsarist police opened fire on a workers' march in Łódź, killing ten people. The funerals, held on June 20th and June 21st, became the focus of further demonstrations, and the Cossack Cavalry were ordered to charge into the unruly, stone-throwing mob. Twenty-five people were killed, and by nightfall what had started off as a demonstration had turned into a full scale revolt.

Violence spread across the city, with insurgents united under a red banner. By June 23rd the situation had escalated out of control, prompting Tsar Nicholas II to sign a decree enforcing Martial Law in the city. Battles raged in the streets of Łódź, with the revolutionaries not just facing Russian troops, but also the supporters of Roman Dmowski’s National Democratic Party. An attempt to bolster the insurgents' numbers by sending sympathetic supporters from Warsaw was thwarted, and by June 25th the last of the barricades was captured. Official sources put civilian casualties at 151, though unofficial reports claimed over 200 dead and thousands injured.
The 'Łódź Insurrection' or 'June Days' (as they came to be known) ultimately proved a chaotic and tragic failure, but did serve as a catalyst for copycat riots and strikes that broke out across Poland - collectively known as the 'Revolution in the Kingdom of Poland' (1905-1907). Strikes in Łódź would continue until mid-1906, and general unrest remained in the city leading up to WWI, after which Poland finally regained independence in 1918. Aside from a garish monument near the Zoo, today the dramatic events of June 1905 are largely forgotten in Łódź, but those with a nose for history should visit the Museum of the Tradition of Independence; set inside a former prison, it's here that scores of demonstrators found themselves incarcerated.

Sites in Łódź Related to the June 1905 Revolution

ul. Rewolucji 1905 roku 58
/lodz/revolution-of-1905_152708v
This mural commemorates the Revolution of 1905 in Łódź! The creator of the work is the Klub Krytyki Politycznej (Club for Critical Politics). The work was …
see more
Museums

Museum of the Tradition of Independence

ul. Gdańska 13
/lodz/museum-of-the-tradition-of-independence_20757v
Set inside a former Tsarist prison your tour begins on the ground floor, where a walk around the former cells allows visitors to glimpse depressing sights like …
see more
Monuments

Monument to the 1905 Insurrection