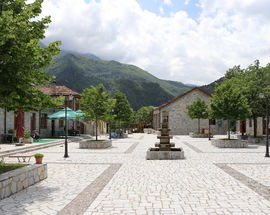 The entry to the Kelmend region at Albania's northernmost tip can't be more dramatic. After climbing steadily up from the lake shore at Hani i Hotit, you cross a pass and the suddenly you're face to face with a dramatic drop where the road serpentines to the bottom of the valley in tight hairpins. In the first bend, the Leqet e Hotit viewpoint has a panoramic glass balcony sticking out, a good spot for taking photos of the mountains crowding the horizon. Down in the valley, the road follows the Cem river canyon, where farmers use makeshift cable systems to reach their small fields on the other side, before arriving at Tamara, 65km from Shkodra.
Tamara is the main village of the traditionally Catholic Kelmend region, stretched along the wild river Cem in with imposing mountain peaks all around. The alpine-style village centre has recently been pedestrianised and renovated, making it a very pleasant place to stop over for a look at the views and a meal at one of the traditional restaurants. It's a good base for hikes in the wild surroundings, too, for example to the 300-metre deep Malqe Grada cave. The village's feminine name is said to have come from the 18th-century Tamara bridge, which in turn was named after the wife of the Vizier of Shkodra - take one glance at the roaring Cem river in the springtime rafting season, and you'll understand why bridges were so important in this region. A steep side road from Tamara leads to the remote hamlets of Vukel and Nikç, 500m above sea level, where abundant water sources allowing for irrigation of the fields.

Tamara - What to See

/malesia-e-madhe/selca-village-waterfall_170013v
Just 8km upstream from Tamara along the main road, Selca sits at the end of the 900-metre-long Gerrla Canyon. Calm and peaceful now, it was the site of many …
see more
Tamara - Where to Stay & Eat

Tamara
/malesia-e-madhe/sofra-kelmendit_170015v
The nicely designed 'Kelmend table' tavern at the top of Tamara's pedestrian street serves trout, lamb straight off the spit and other home made meals, with …
see more
Tamara - Where to Stay & Eat

Tamara
/malesia-e-madhe/te-cemi_170014v
At Cemi's, local trout and roast meat are served with a big smile, typical Kelmend side dishes, and home-made bread. Set in a charming stone building on the …
see more
This site uses cookies. By continuing to browse the site, you are agreeing to our use of cookies. Find out more here. AGREE
Countries
Top