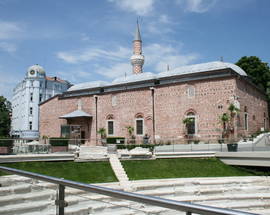 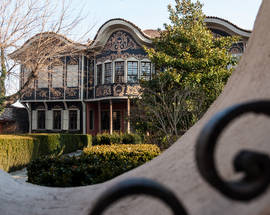 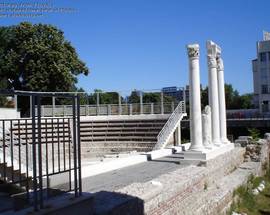 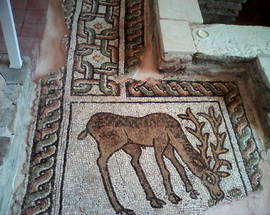 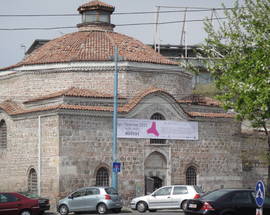 342 B.C. Philip II of Macedonia conquers the city and names it Philippopolis;
72 A.D. The Roman general Terentius Varo Lukulus captures Plovdiv and gives it the name Trimontium (City of Three Hills), making it capital of the province of Thrace. Trimontium is an important crossroads for the Roman Empire (sitting on the main 'via militaris' from Constantinople to Rome) and Lucian calls it "The largest and most beautiful of all cities" in Thrace. The city prospers as is evident from the remains of Roman Forum, Theatre and Stadium today.

447 Sacked by Huns;
Middle 6th century Slavs are fully settled in the area;
681 Founding of Bulgarian state: Philipopolis remains in Byzantium and becomes an important border fortress of the Byzantine Empire;
812 Captured by Bulgarian Han Krum;
970 or 971 Plovdiv is recaptured by the Byzantine Empire and renamed Philipoppolis;
1204 – 1344 The city is subject to constant battles for power by the Byzantines and Bulgarians, at times also being ruled by Crusaders.

1364 The Ottoman Turks under Lala Shakhin Pasha seize Plovdiv. The Turks call the city Filibe and make it capital of Rumelia;From 1364-1864 Plovdiv is a 'sandjak' (administrative district of the Turkish Empire within a province);
1382 Sofia falls to Ottoman rule and becomes the main city in the province.

National Revival Period
As a trade centre Plovdiv plays an important role in the National Revival: its citizens were able to travel and trade with the Empire, bringing back new ideas and financing the construction of Bulgarian-style homes, public buildings and ,importantly, schools and churches;1836 First Bulgarian school established in Plovdiv;
1858 In the Church of Virgin Mary the Christmas liturgy is served for the first time in the Bulgarian language since the beginning of the Ottoman occupation;
1878 The city is liberated from the Ottomans during the Battle of Plovdiv.

Eastern Rumelia and Unification
March 3 1878 A preliminary peace treaty is signed with the Ottoman empire at San Stefano (near Constantinople), which foresees the creation of the Principality of Bulgaria including all areas with predominantly Bulgarian population. Plovdiv is chosen as capital and as seat of the Temporary Russian Government. Great Britain and Austria-Hungary do not recognize the treaty and hold a new congress in Berlin in the summer of 1878 at which they separate the autonomous region of Eastern Rumelia (with Plovdiv as capital) from the rest of Bulgaria. At the time, it had a population of about 33,500, of which 45% were Bulgarians, 25% Greeks, 21% Turks, 6% Jews and 3% Armenians;
Spring of 1885 Zahari Stoyanov forms the Secret Bulgarian Central Revolutionary Committee in Plovdiv and actively conducts propaganda for the unification of Bulgaria and Eastern Rumelia;
In early September 1885 a riot in Panagyurishte is followed by another in Golyamo Konare (now Saedinenie), resulting in an armed march on Plovdiv and the taking of the city on September 6. Knyaz Alexander 1 of Bulgaria approves the new government on September 8 and enters the city as its monarch the following day, dismissing the temporary government. Today the 6th of September is celebrated as the Unification Day and the Day of Plovdiv.The European powers only acknowledged the unification in 1886 after the Serbo-Bulgarian war.

Recent History
After the unification Plovdiv remains the second city in population and significance after the capital Sofia;
1874 The first railway built;
1888 Rail link with Sofia;
1892 Plovdiv becomes host of the First Bulgarian Fair which eventually becomes the International Fair Plovdiv. First brewery is established in the city;
20th century Plovdiv grows into a significant industrial and commercial centre;
1943 1,500 Jews are saved from deportation to concentration camps by the archbishop of Plovdiv Cyril who later becomes Patriarch of the Bulgarian Orthodox Church;
1960s and 1970s Construction boom when many of the modern (high-rise) neighbourhoods take shape;
1970s and 1980s antique remains are excavated and Old Town is fully restored;
November 10, 1989 Plovdiv is a major centre of demonstration for democratic change in Bulgaria and earns the nickname: "the blue (democratic) capital of Bulgaria."
1990 Sports complex Plovdiv is finished, it includes the largest stadium and rowing canal in the country.