So close to the mainland and so easy to get to thanks to the bridge, Krk is not only the second largest Croatian island but also has one of the most developed tourist industries. Its western seaboard, along which the main artery runs from north to south, is where most larger resorts are located.

Omišalj, despite the closeness of an important terminal for the shipping of oil, has a very attractive old cliffside centre, while Malinska and Njivice are much newer settlements mainly centred on tourism. It’s quite possible to spend your holidays here without realising exactly how much the island has to offer.
Krk is rich in both human and natural history. The island was once the seat of the Frankopan family – a powerful dynasty of Croatian counts and nobles who built many of the forts, churches and monasteries you'll come across on your travels through Kvarner. Christianity arrived here in the 5th century, and has remained exceptionally strong, so the island is dotted with churches, some early Christian, others with a characteristic onion dome topping the bell tower. The Glagolitic script brought to the Slav lands by Saints Cyril and Methodius took very firm root here, and many inscriptions of great historical significance have been unearthed, or can be seen on buildings, lending an air of the exotic with lettering which resembles a secret code written in the shape of mushrooms and cherries!

Krk Town is the island’s capital, and inside its walls is a lovely little maze of stone streets. Since there’s quite a lot to see, it’s a place to stay in or visit for a day, but be prepared for crowds in the height of summer. There’s a little beach just under the city walls, a pleasant spot to bathe.
Krk’s Cathedral of the Assumption of Mary is built on a site where a church has stood ever since the 5th century. Adjoining it is the early Romanesque Church of St Quirinus, protector of Krk. This simple church, formerly the chapel of the bishops of Krk, has an unusual clover-leaf shape on two storeys. Inside, the sacral art museum includes an impressive 14th century painting by Paolo Veneziano and a collection of silver and gold. When the cathedral’s not open, you can peep into its interior from here. The cathedral backs onto a square with a distinctive 12th century fortress with blunt forms typical of Frankopan constructions. This is the venue for summertime cultural happenings.

Close to Krk town, Punat has a large marina and the islet of Košljun lies in the sheltered bay. On the islet, the Franciscan monastery has a museum with an excellent ethnographic collection, sacral art, a library and a natural history section with some stuffed animals with too many appendages that are sure to thrill the kids. The monks run retreats, and cultural performances are also held here. It’s well worth taking a taxi boat over.

Of course, many of us head to the sea for… well, swimming! Drive through the green valley to Baška in the east, and you’ll come to a modern resort on a beautiful 2km sweep of clean shingle and turquoise sea. The view over the mainland is stunning, and it’s a great place to swim if you don’t mind the crowds at high season.

For gastronomy, we recommend you head for Vrbnik, topping a steep hillock on the northern coast, with a tiny emerald-green harbour at its feet. In the maze of narrow streets and stairways, locals say, is the narrowest street in the world. The town is surrounded by vineyards where žlahtina, a type of wine unique to Krk, has been made for generations. Wandering through Vrbnik you have the overwhelming impression that old wine barrels lie abandoned everywhere, and the smell of wine permeates everything. Vrbnik is blessed with a couple of very famous restaurants.

If you’re already in Vrbnik, we recommend you take a detour to the small village of Dobrinj. The vineyards soon give way to cool deciduous forests. The road winds uphill, and when you come to the village you start to think of Tuscany. The view from the lovely Church of St Stephen with its wide, stone-flagged, roofed porch encompasses the lush forests of the island interior, hillsides punctuated by dry stone walls, and the entire Kvarner Gulf. A little further north of Dobrinj is the Biserujka Cave, the only one of fifty on the island open to the public. As its roof is so close to the surface, rain water seeps through the rock and has formed incredible stalactites. 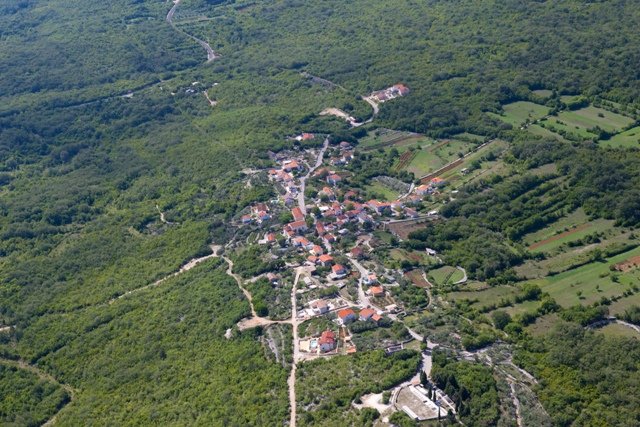 Josipa Jurja Strossmayera 9, Krk
EDITOR'S PICK
/rijeka/krk-tourist-information-center_117257v
So close to the mainland and so easy to get to thanks to the bridge, Krk is not only the second largest Croatian island but also has one of the most developed …
see more
Editor's pick
Krk - Golden Island

Frankopanska 1, Vrbnik, Krk Island
/rijeka/gospoja_97488v
An agricultural collective which has a winery, a highly-regarded restaurant, a pizzeria and a wine-tasting room. This is a great place to try Krk island …
see more
Krk - Golden Island