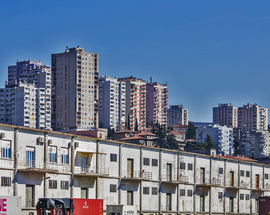 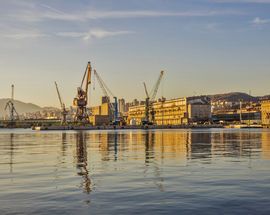 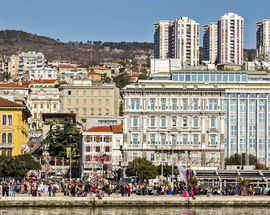 One of the things that makes Rijeka such a fascinating place to visit in 2020 is the fact that the the Bay-hugging city will serve (alongside Galway in Ireland) as European Capital of Culture. Operating under the title “Port of Diversity”, Rijeka’s 2020 plans aim to highlight the historical and cultural complexities of what has frequently been a crossroads of peoples and fates.
An important aspect to the lead-up to the event has been the preparation of cultural infrastructure that will serve the city well in the coming year, and provide lasting value in the years that follow. The former Benčić factory, a sprawling mass of red brick and plaster standing opposite Rijeka railway station, is an important focus of post-industrial repurposing: the Museum of Modern and Contemporary Art moved into part of the complex last year; the City Museum will take over the factory’s lovingly-restored, late-Baroque administrative building at the end of 2019. With a new public library planned for the remainder of the complex, Benčić will become a knot of cultural activity for generations to come. Another idea developed with the future in mind is Ri-Hub, a municipally-run co-working and conference space that also functions as a coordination centre for neighbourhood cultural and social initiatives. One major project that looks et to impact on the tourist imagination is the restoration of the Galeb, the official yacht used by Yugoslav President Josip Broz Tito currently moored on Rijeka’s seafront. Purchased by the city of Rijeka, the hulk will reopen as a museum that looks set to become a major historical attraction. There are also plans to smarten up and revitalize the area where the river Riječina flows into the sea: Nikola Bašić’s non-denominational house of prayer is one mooted structure that may or may not be built in time for the big event.
The onset of Rijeka 2020 has also led to a host of fresh initiatives in the festival sphere, with many new summer events tried out experimentally in 2018-2019 to see how the programme for 2020 will shape up. It is hoped that the best of these events will survive long-term, providing the city with a summer-long arts-and-music profile. Hence we are already into the second year of Ciklus Furioza, a spring-summer cycle of concerts that concentrates on female performers with an indie background. Other festive events green-lighted for 2019 and 2020 include Porto Etno, celebrating the food and music of the multifarious ethnic groups that make up Rijeka and its hinterland; and Sweet & Salt, an indie-meets-electronica music festival that makes the most of urban locations.
Elsewhere the 2020 team are putting the finishing touches to a packed programme of exhibitions and events. The accent will be on communities, local culture and lasting legacy, with particular attention to the outlying island and village communities that don’t always feel as if they are part of the big urban picture. What is clear is that the Rijeka 2020 party has already started, and looks set to keep on running long after the date itself has passed into history. More details on www.rijeka2020.eu