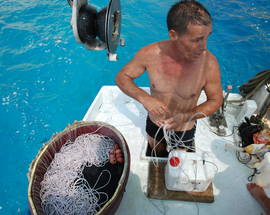 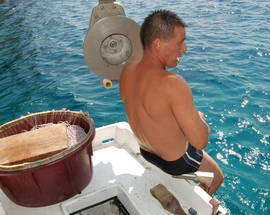 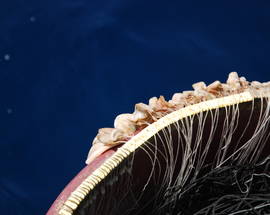 "The gods do not subtract from the allotted span of men's lives the hours spent on fishing." - Assyrian proverb

The Croatian Adriatic is among cleanest seas in Europe. Add to that its warmth, shallowness, and lack of strong tides and currents, and you have an ideal environment for the joys of recreational fishing.


Croatia is often called “the country of a thousand islands” due to its 66 islands, 652 islets, 389 rocks and 78 reefs. The waters of the Adriatic are rich in fish, aquatic mammals, seaweed, plankton, shellfish, crabs and sponges. It’s no wonder that the tradition of fishing here goes back millennia. Apart from being a vital industry and a traditional way of life, fishing today for many people provides an ideal way to relax and reconnect with nature.


Fishing techniques tend to be passed down through generations, and you’ll often see grandparents and grandchildren heading out happily together to catch fish. The locals, of course, know the best tips and tricks for their particular waters, and will usually be glad to help and advise you.


Keen anglers will find all kinds of fishing opportunities in Croatia due to the diversity of the coastal terrain. Just some of the places you might like to explore include: the islands of Mali Lošinj, Jabuka, Svetac and Mali Ždrelac; the channel that connects the Zadar and the Central channels; and the Bay of Pag, where there are so many fish that you can exceed your legal fishing limit with alarming ease. Then there’s the Tri Sestrice islets near Zadar and the entire Zadar archipelago. Lovers of spearfishing will find their nirvana in the mystical depths around the islands of Glavat and Molunat. You can also have unique fishing experiences off the coast of the Pelješac peninsula and close to the island of Šolta, a spot so beloved of Roman emperor Diocletian that he ordered fish ponds be built on the island. You might be lucky enough to spot a Mediterranean monk seal, one of the world’s most endangered species, which is often spotted around Šolta.


There are several ways to fish at sea, and most people take part in sea fishing for sport and recreation. Whichever kind of fishing you want to enjoy, you must first make sure you take care of the paperwork. You can buy permits covering one day (60kn), three days (150kn), seven days (300kn) and one month (700kn), while Croatian citizens and foreigners with temporary residence in Croatia can buy one year permits. Prices are subject to change, and are the same for sport and recreational licences. When buying a sports licence you must also purchase a membership card of the Croatian Sea Sport Fishing Association, which costs 50kn. Licences can be bought at offices of the Ministry of Agriculture, Fisheries and Rural Development in Pula, Rijeka, Senj, Zadar, Šibenik, Split, Ploče and Dubrovnik; in travel agencies, harbourmasters’ offices and from authorized resellers; while the membership card of the Sport Fishing Association is bought from the organization itself. You can find a list showing where to buy recreational licences at the Minstry’s website, www.mps.hr, which has English pages. For the sport fishing licence and membership, see www.hssrm.hr/mjesta-prodaja-dozvola.html


Fishing is not allowed in special reservations, in harbours or on beaches between 1 June and 1 October. There are special regulations governing fishing in national parks. The maximum daily catch is 5kg for recreational and sport licences, and you may not sell or exchange your catch. There is also a list of regulations on the protection of fish species which stipulates the minimum size of commercially important fish and other sea creatures that may be caught. If you accidentally find a female spiny lobster in your net, or a European lobster with eggs, you must immediately put them back in the sea regardless of their size.


Most people go fishing from a quiet spot on the shore or from a small fishing boat, while adrenalin seekers go for either big game fishing or spearfishing.


Big game fishing is an exciting sport using fast boats on the open sea to catch powerful fish such as tuna and marlin. Licences are for sale in travel agencies. The largest and most prized catch on the Croatian Adriatic is bluefin tuna, which is in season from August to January. The belt of water around the island of Blitvenica and the Kornati archipelago is especially suitable for bluefin tuna fishing. Other “big game” which can be caught in this way include swordfish (sabljarka), greater amberjack (gof), Atlantic bonito (palamida), dolphin fish (lampuga), and blue shark (modrulj).


The beauty of this sport is its unpredictable nature and the co-ordination of the whole crew on board the boat. If you would like to try your hand, your best bet is to contact one of the agencies listed below. Alternatively, if you visit the village of Jezera on the island of Murter, you can watch (or take part in) Europe’s largest big game fishing competition.


Spearfishing is the most selective form of fishing. You can fish while free diving, snorkelling or scuba diving, and nowadays anglers use elastic-powered or compressed gas spearguns or slings to hunt the fish. Spearfishing can only take place during the daylight hours for obvious reasons, and the sport requires you to be both physically and psychologically fit due to both the diving skills required and the weapon used. In the Adriatic, the best spearfishing is to be had in late summer and early autumn. The best fish is to be found where the sea has a rocky bottom, providing shelter for the fish. The best-known spearfishing competition in the Adriatic is the New Year Spearfishing Cup held on the island of Mali Lošinj.


Finally, don’t forget, whichever kind of fishing you go for, it’s important for your sake and everyone else’s that you keep within the law and fish in a responsible and ethical manner.


We wish you calm seas and a plentiful catch!