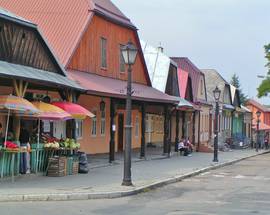 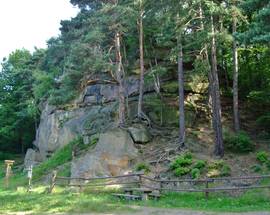 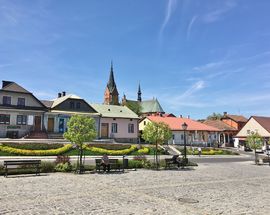 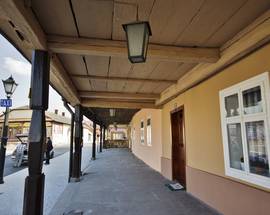 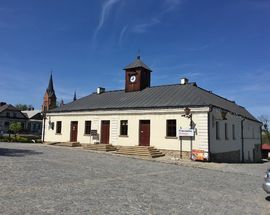 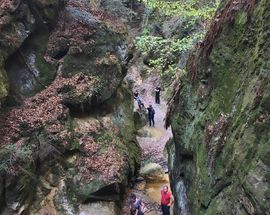 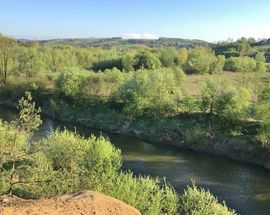 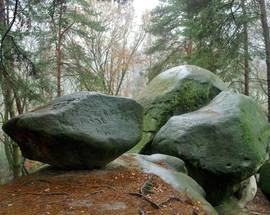 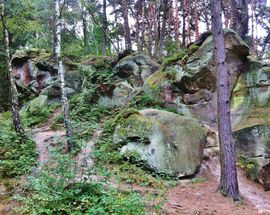 This amusingly-named town located about 40km south of Tarnów on the Biała River hardly looks like more than just another blip on the map, though when that map is of Małopolska you never know what you'll find. Scarcely more than a village, Ciężkowice's population is well under 5,000 inhabitants, but the town has a history that dates all the way back to the 10th century and, like most towns in the region, possesses a small, charming market square lined with arcaded wooden houses, a rather modest Town Hall at its centre and a rather spectacular Neo-Gothic church at one end. While entirely endearing, it’s hardly enough to merit packing the kids into the car on its own. However, Ciężkowice does boast two surprising attractions that make this modest Małopolska town the perfect destination for an active and educational day trip from Tarnów or Kraków; namely, the Stone City Nature Reserve and the Krystyna & Włodzimierz Tomek Natural Science Museum. Pack a lunch, grab a compass and off you go.

Located deep in southern-eastern Małopolska halfway between Tarnów and Nowy Sącz, Ciężkowice is best reached by car, with which you'll be able to easily access all the town's sites. Free parking is plentiful on the market square (Rynek) and at the Natural Science Museum, and parking is also available at both ends of the Stone City hiking trail. If you don't have your own vehicle, don't fret; there are many buses and trains that reach Ciężkowice. Buses will drop you off right on the Ciężkowice market square, where you'll find the Tourist Information office, and from which you can easily walk to either the Natural Science Museum or Stone City (though they're in opposite directions). Trains are less optimal due to the station's location in Bogoniowice. Although titled 'Bogoniowice-Ciężkowice' station, it's about a 20min walk from the station to the centre of Ciężkowice; the Natural Science Museum is 15mins on foot, while the entrance to Stone City is 3km on the black trail from the train station (about 35-40mins on foot). For journey planning by bus or rail we recommend the website e-podroznik.pl.

FROM TARNÓW
A straight shot south down Route 977 from Tarnów, if you have a car getting to Ciężkowice will only take about 40mins. Buses from Tarnów's Bus Station run frequently (generally every 20-40mins); note that many are marked for Gorlice, but they all stop at Cięzkowice's Rynek. The journey takes about 40-50mins and costs only 6-7zł.

FROM KRAKÓW
From Kraków the A4 highway is free going east; get off at the Brzesko/Nowy Sącz exit and follow your GPS through Jurków, Zakliczyn and Gromnik. The journey by car is about 1hr 40mins.

What to See & Do in Ciężkowice

ul. 3 Maja 34, Ciężkowice
featured
/tarnow/natural-science-museum_113002v
As if this random village didn’t have enough going for it already, there’s probably no better example of the influx of EU money into Poland than Ciężkowice’s …
see more
Featured
Ciężkowice

ul. Rynek 1, Ciężkowice
/tarnow/ciezkowice-tourist-information_112997v
Located in the centre of the market square in the Town Hall, this is Ciężkowice's primary Tourist Information Centre, though you can pick up some tourist …
see more
Ciężkowice

ul. Krynicka, Ciężkowice
/tarnow/stone-city-tourist-information_149745v
This seasonal tourist info hut (open from April until end of September, weather-dependent) is located at the main entrance to the Stone City trailhead on ul. …
see more