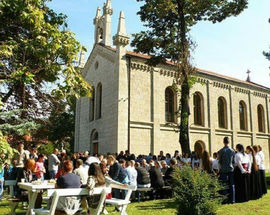 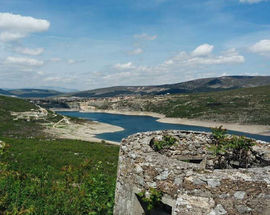 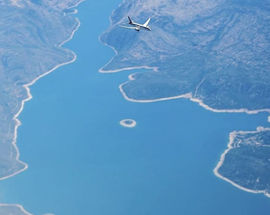 Bileća is a small town just an hour or so north of Trebinje, famous for its artificial lake and delightfully warm climate, one that gives even the City of Sun a run for its money. The usual ‘crossroads’ cliches apply, with Bileća getting its moment in the sun (yes, pun intended) in the 1388 Battle of Bileća, where the Bosnian Army (led by Vlatko Vuković) held the Ottomans at bay for just a little longer. The battle helped the Christian nations come together against the Ottoman threat, but history tells us that how that went.

But anyway, Bileća. A small town of less than 10,000 people, the face of the town completely changed with the creation of Lake Bileća in 1968, finally giving the people of this harsh land a surface water source. It also gave tourists something to gawp at, and undoubtedly dominates the attractions today. Throw in the usual mix of stećci, churches, monasteries and fortresses, and you’ve got a charming place to stop on your way between Trebinje and Mostar.

featured
/trebinje/bileca-stecci_167836v
The numerous stečci graveyards dotted around Bosnia and Herzegovina may well be the key to the history’s soul, but few are as picturesquely located as this. …
see more
Featured
See

featured
/trebinje/lake-bileca_167835v
Bileća lake was created in 1968 when the Grančarevo Dam was constructed and now dominates a stunning landscape of lime stone mountains and karst formations, …
see more
Featured
See

featured
/trebinje/church-of-st-sava_167839v
There is always a Church of St Sava. Constructed in the late 19th century, this church in the heart of Bileća was paid for by donations from the local Orthodox …
see more
Featured
See

/trebinje/dobricevo-monastery_167840v
Built on the foundations of a former Basilica, Dobrićevo monastery was actually moved to its current position after the completion of the nearby hydo power …
see more
See

/trebinje/drakuljica-fortress_167837v
When the Austrians came in and occupied Herzegovina, they were quick to build a barrage of fortresses (a contradiction, sort of, but there we go) in and around …
see more

11 Restaurants and Cafes That Our Editor Will Be Gluttonously Embracing Once This Godforsaken Lockdown is Over feature
Trebinje's Favourite Son: The Life of Jovan Dučić feature
Most Instagrammable Spots in Trebinje feature
see more
Put our app in your pocket