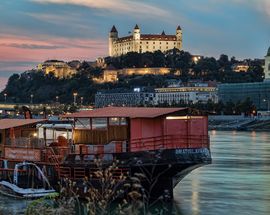 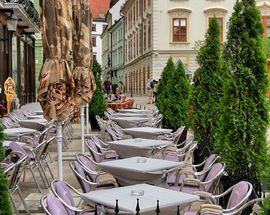 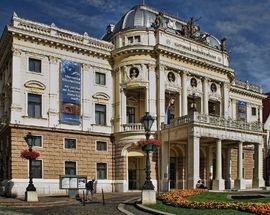 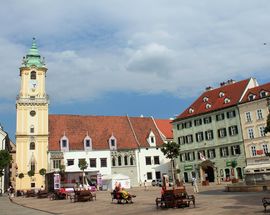 No two capitals in Europe are geographically closer than Vienna and Bratislava, so why not make a short day trip to the magnificent Slovakian capital? Bratislava is one of the continent’s great underrated cities, the undoubted centre of Slovakian culture and history, and an immensely fun place to boot. Just an hour’s drive east of Vienna, Bratislava is another Danube beauty just waiting for your love.

Bratislava Castle
The number one attraction in the country and for good reason. Bratislava Castle stands proudly above the city is protects, a stunning construction with four towers marking its corners, offering some of the most incredible views in all of Europe. The vistas of the Slovak capital are one thing, but on a clear day you can even see into Austria and Hungary from this vantage point. The castle is a stunning complex of entrance gates, courtyards, gardens and more, a truly regal residence for the wealthiest of the wealthy through the city’s history. It actually spent a large portion of its modern history in ruin, before a massive restoration project began in 1957, a project that was completed to much fanfare in 2010. One of Europe’s great city castles and nothing less.

Old Town Hall
Step into a genuine time machine by visiting Bratislava’s Old Town Hall. A complex of buildings whose history dates back to the 13th century, it predictably takes pride of place in the very heart of the old city. It is actually the result of bringing a number of buildings together, all important components but amalgamating to produce something genuinely special. The City Museum is found within, along with some more excellent views of the Old Town. Look out for the cannonball embedded in the tower wall, a leftover from when that dastardly Napoleon tried to smash the city to bits in 1809.

Michael's Gate
Welcome to Bratislava. The only remaining gate from Bratislava’s 14th century fortifications, Michael’s Gate is thus one of the oldest buildings in the city. Its 51-metre tower is its most recognisable feature, a Baroque structure that truly acts as a welcoming door to the main event of Bratislava. The views from the tower are stunning, although many visitors don’t even get to find out about the dragon statue on top. The gate acts as a symbolic attraction for many, but don’t be afraid to nip inside and see what it has to offer.

Statues of Bratislava
Bratislava is home to a wide variety of truly unusual statues, some with a point and others well and truly pointless. The most interesting are found in and around the main square, from the cheerful dandy Schöne Naci to the rubbernecking Man at Work. Watch out for the Paparazzi though…


Flag Ship
One of the city’s great restaurants, Flag Ship is a great option for anyone after a genuine Bratislava culinary experience. This is one of the biggest restaurants in Europe but reservations are still recommended, such is its popularity, and its elegance justifies its adoration. Slovak food dominates the menu, with a respectful nod to the history of the nation.

The Cut
Meat, meat, a little bit of meat with a healthy side serving of extra meat. The Cut doesn’t beat around the bush, offering a wide variety of steaks along with plenty other specialist treats for carnivores. Pulled pork, jerk chicken, pastrami and more fill the menu, available in steak, salad or sandwich form. Agreeable prices round off the whole offer.

Foodstock
The name isn’t coincidental. The forward-thinking and creative mentality of the original Woodstock festival is replicated in this Bratislava bistro, a central spot that is 100% vegetarian friendly and produces dishes designed to improve your mood via the magic of food. Buckets of healthy in a delightful package.


Čierny Pes
Our little secret, so don’t shout it too loudly. Čierny Pes (The Black Dog) is a very small pub hidden within the old town, Bratislava’s premier ‘living room’ style boozehouse and one that we keep returning to again and again. The bar is tiny, the door even smaller, and there isn’t a huge variety of beers available, but it doesn’t matter. The Black Dog is without doubt one of our favourite pubs in town.

Stupavar Beer Pub
A darling little beer house with two rooms, Stupavar focuses on its own brews and is all the better for it. The available beers depend on what they’ve put together recently, guaranteeing something new every time you visit. The interior is sparse to say the least, but what more do you need on top of great beer and a friendly atmosphere? A bust of Lemmy? Sure, there’s that as well.

kc_dunaj
Hidden away on the fourth floor of an old warehouse in the city centre, kc_dunaj is the heart and soul of Bratislava’s alternative scene. Live music, literary evenings, theatre, dance nights and good old fashioned boozing await behind the doors, all surrounded by an interior that is best described as ‘eccentric’. This is the sort of place your parents will describe as having ‘character’, so it is the sort of place you should absolutely seek out when in town.

black.​​​​​​​
Minimalism personified, black. isn’t the place to go if you’re after a wide variety of coffees. As the name suggests, milk is somewhat anathema here, and we’re not afraid to admit that that is how we like it. Coffee for people who like their brew hot, black and expertly made. This little spot on Gorkeho is also dog-friendly.

Kaffee Mayer
Mayer is a cafe with masses of tradition behind it, although that should be obvious from its prime position on the main square. The cafe opened way back in 1913 and originally supplied confectionary to the imperial court, and there are plenty of sweet treats waiting for visitors today. ​​​​​​​