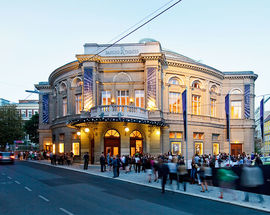 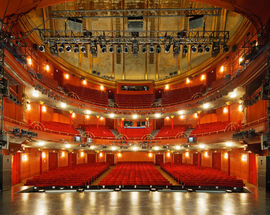 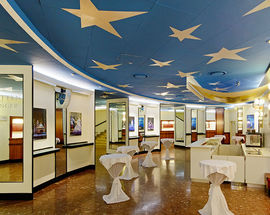 Where today spectacular musical productions with fantastic stage design and scenery, captivating choreography and celebrated stars fill the stage, Viennese audience favourites such as Paula Wessely and Attila Hörbiger were first discovered. Founded in 1893 as a suburban theatre for an extremely wide circle of visitors, the theatre first housed traditional theatre works. From 1908 however, operettas were played with increasing demand which due to their great success were frequently months ensuite.

The success of the operetta productions lasted up to the 1970s, due largely to rising stars such as Marika Rökk, Zarah Leander und Johannes Heesters. It was not until 1976 that the first scattering of musicals began to fill the stage of the Raimund Theatre. However, the true musical triumph of the legendary house began after major refurbishments in the mid-1980s, and integration into the VBW. A Chorus Line, in 1987, was the first major Broadway show to be performed here.

You can take a backstage tour of the theatre every Tuesday at 15:15, Saturday at 16:15 and Sunday at 13:15. Tours last for around an hour and are conducted in German. They cost €7 for adults and €5 for concessions. Numbers are limited to 25 people per tour, so book your tickets online in advance to guarantee a place.