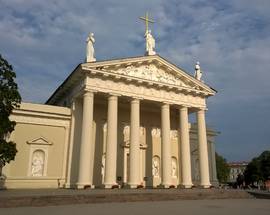 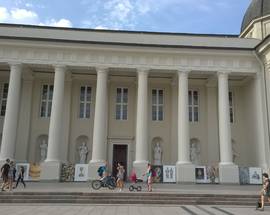 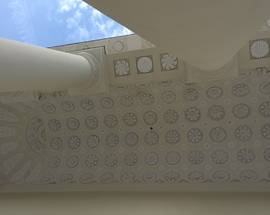 The most important Catholic building in Lithuania, Vilnius Cathedral as it’s more commonly known was first built in 1251 by newly converted Grand Duke Mindaugas on the site of a pagan temple. Returned to pagan use after Mindaugas’ death in 1263, it was given back to the Catholic Church on the country’s official conversion to Christianity in 1387. The building that now stands in its place has little to do with the original structure. The current building dates to around 1419, with countless modifications and additions made after that. The Neo-Classical form is largely down to Lithuania’s first true architect, Laurynas Stuoka Gucevičius (Pol. Wawrzyniec Gucewicz, 1753-98). The rather plain nave betrays eleven chapels, among them the must-see High Baroque Chapel of St. Casimir (1458-1484), named after Lithuania’s patron saint. Built in 1636 to house his remains, the chapel is one of the country’s national treasures. On the roof of the Cathedral, the three statues of Sts. Stanislaus, Helena and Casimir are 1997 copies of the 18th-century originals which were destroyed by the Soviets. Spending several years as an art gallery, the Cathedral was returned to the Catholic Church on October 22, 1988 during the eventful Sąjūdis Congress and re-consecrated on February 5, 1989. The 57-metre free-standing bell tower, now a popular meeting place, was originally part of one of the gates in the city’s defensive wall and has been added to several times over the centuries.

This building stands magnificently at the end of the 1.2km long Gediminas Street and always takes my breath away when I see it. Recently cleaned, it is startlingly white and suitably grand for the premier church of Vilnius. Take a walk around the inside and marvel at the cool and bright space and let your eye be drawn to the golden altar which appears framed by four sombre grey marble pillars. Set to one side of the cathedral is the chapel of St. Casimir, the patron saint of Lithuania. His remains rest here behind magnificent golden bas- relief frescos. Don't forget to take time to admire the many paintings hung throughout the cathedral. I keep visiting this building everytime that I am in the city and I haven't even been to the interesting crypt yet! Try it and I defy you not to be as captivated as I am.
Take your guide with you Download a pdf