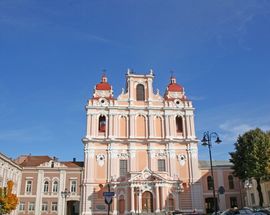 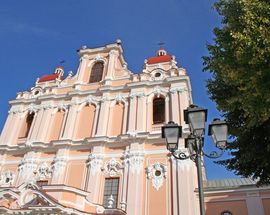 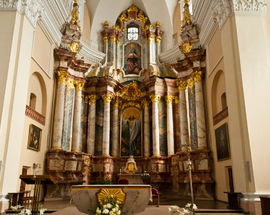 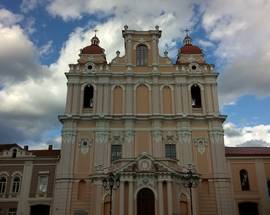 Founded by the Jesuits and dedicated to ’s patron saint Casimir (Šv. Kazimieras, 1458-1484), construction on this mighty building began in 1604 and was completed in 1635. Burnt to the ground 20 years later when the Russians invaded in 1655, fire visited twice again within the next century in 1709 and 1749 before Tomas Žebrauskas (Pol. Thomas Zubrówka, 1714-1758) restored it to more or less the form it's seen in today. A victim of many fates like most churches in the city, after spending time as a museum of atheism, the church was return to its rightful owners in 1988 and re-consecrated three years later. It’s since undergone a massive renovation project, restoring its predominantly Baroque style with Gothic and Renaissance touches. Of particular interest inside are three Late Baroque altars and a recently discovered 17th-century crypt containing dark bas-reliefs featuring miscellaneous religious motifs.