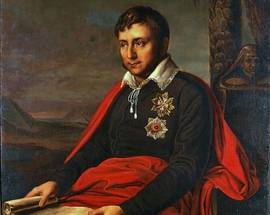 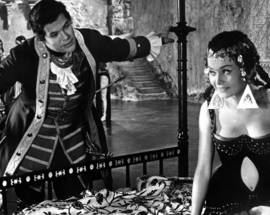 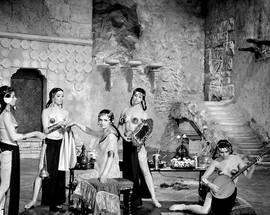 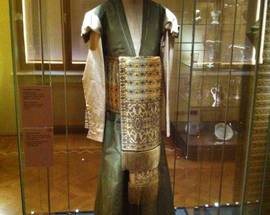 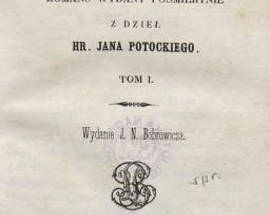 Most Western readers have never heard of Count Jan Nepomucen Potocki; indeed, his singular literary masterpiece was only translated into English in 1995, some 180 years after it was completed. However, here in Poland he remains a household name, achieving no small share of celebrity during his own lifetime, a celebrity which he has sustained in the nearly two centuries since his death. Potocki’s immortality is due as much to the endurance of his strange, supernatural novel The Manuscript Found in Saragossa as it is due to the mystery and intrigues of his life – and the bizarre circumstances of his departure from it. The Saragossa Manuscript (as it is also known) is therefore that rare work of literature, the story of which is inextricably entwined with that of its author, each giving the other more speculative potency.

Unlike most of us, Jan Potocki (1761 – 1815) had the good fortune of being born into one of the wealthiest aristocratic families in Poland; his great-uncle Franzciszek was known as the ‘King of Ruthenia’ due to the hundreds of towns and villages he owned across over one million hectares and was the wealthiest Pole in history up to that time. Wealth was a privilege Potocki put to good use throughout his life – a life composed primarily of exotic globetrotting exploits in the pursuit of secret knowledge (nowadays we have Wikipedia). Born in what is today Western Ukraine, the young Count was educated in Geneva and Lausanne where he received a solid grounding in what was known of the world at that time and developed an amazing capacity for languages, speaking eight fluently. From Switzerland it was off to the Vienna Academy of Military Engineering, after which he spent two separate stints in the Polish Army as a captain of engineers, interrupted by a gig upon a galley in the service of the Knights of Malta which included a naval battle against the Barbary corsairs (dastardly Muslim pirates of the era).

Potocki was getting around, as the independently wealthy so often do. Hop-scotching through continental Europe, the Count developed a strong scholarly interest in other cultures about which he began to write extensively, as well as recording accounts of his own spirited adventures thus becoming one of the first modern travel writers. Collecting historical, cultural and linguistic research as he went along his way through North Africa and Asia, Potocki wrote a series of books and essentially founded the study of ethnology. It was a passion he applied to his own homeland as well, finding time to also found the study of Slavic languages and civilizations about which he wrote extensively. In Morocco the Count lead an unsuccessful treasure hunt for an original manuscript of Arabian Nights and went to Constantinople where he met Osman, the Turkish valet who would be his lifelong companion, never leaving his side despite the Count’s propensity for wearing a fez and oriental dress from this time forward. In the 1780s he prowled the salons and cafes of pre-Revolutionary Paris, cavorting with Enlightenment luminaries, Freemasons and the Bavarian Illuminati, who some theorists claim were secretly orchestrating the French Revolution at that very time. There is strong reason to believe Potocki was himself involved in several secret plots and probably became a Freemason during this time due to his natural candidacy and the founding of an Egyptian Rite Freemasonry lodge in Warsaw by the mysterious Cagliostro, whom Potocki is known to have hobbed a nob or two with. Back in Warsaw in 1788, the Count established a publishing company and created the first free reading room in the capital. Despite crossing the Gobi Desert and leading an expedition to Mongolia and Peking in the service of Russian Tsar Alexander, Potocki’s most famous exploit was one of his least interesting: a fanciful hot-air balloon flight over Warsaw in 1790 with French airman Jean-Pierre Blanchard, the ever-present Osman, and his little dog Lulu. Going down in the books as the first Pole to fly a hot air balloon, the event earned Potocki unheralded public acclaim.

Between exploring the Caucasus and learning the secret language of Circassian noblemen, the Count had five children with two wives, the second of which was Princess Julia Lubomirska, whose mother established the famous Łańcut vodka distillery in 1784, the year after their wedding. The distillery is still in operation today, proving that vodka is more enduring than love, as both of Potocki’s marriages ended in scandalous divorce amidst accusations of incest. After the loss of the vodka dowry, Potocki retreated to his Uładówka castle in 1815. Here he grew disillusioned and melancholic, his marriage dissolved, his Illuminati dreams of a ‘universal society’ down the drain with the failure of the French Revolution and Napoleon’s ascent to power. His health diminished and his disturbed mind gave way to morbid fantasies, which, with the completion of The Saragossa Manuscript, he now failed to exorcise on paper. A year after completing his masterwork, Potocki also finished a nervous exercise that he had taken up: the daily filing of a silver sugar bowl lid. The bowl was given to him by his mother and is significant because, convinced that he had become a werewolf, Potocki widdled the silver strawberry knob of the lid into a bullet, had it blessed by the castle priest, and fired it into his brain. Thus ended the life of the mad genius today remembered as ‘the man who shot himself with a strawberry.’ 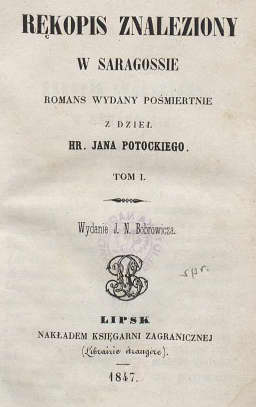 Like Potocki’s life itself, there is sadly not enough room here to explore the depths of his strange, encyclopaedic novel. We’ve read it and it’s dense. Here’s a blink of the premise: The Manuscript Found in Saragossa claims to be a document found by a French officer after the fall of the Spanish city of Saragossa during the Napoleonic Wars. It chronicles the misadventures of a Spanish officer while crossing the lawless Sierra Modena Mountains some 40 years prior. During this trek the officer encounters an ensemble cast of gypsies, ghosts, demons, hermits, knights, cabalists, succubae, sheikhs, secret cults, The Wandering Jew and countless others over the 66 days of the novel. For example: On the first day, our hero spends the night in a haunted inn and encounters two Moorish princesses, who attempt to make him cast off his Christian beliefs, convert to Islam and marry them; he hesitates but nonetheless drinks a potion from a magic cup which invokes vivid dreams during which he enjoys pleasures of the flesh with the two sisters. In the morning he awakes to find himself not in the bed of the inn, but beneath a gallows in the embrace of two corpses. Brushing himself off he sets out again into the fantastic, terrifying adventures of Day 2 (which again ends with him waking wrapped in corpses beneath the gallows). Told as a complex frame narrative in the tradition of Arabian Nights and The Decameron – two books which the Manuscript is often compared to – the novel draws on Potocki’s own exploits, weaving an increasingly confounding web of stories-within-stories that blend the gothic, erotic, uncanny, philosophical, mathematical, supernatural, humorous and picaresque, reflecting Potocki’s obsession with the occult, political conspiracy and ‘oriental’ cultures. It is available in English as a 656 page edition from Penguin and was made into a highly regarded Polish cult film by Wojciech Has in 1965 starring ‘the Polish James Dean,’ Zbigniew Cybulski.