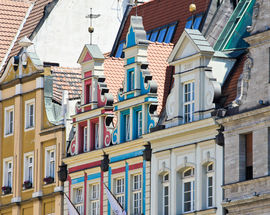 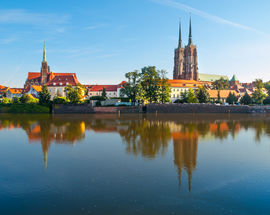 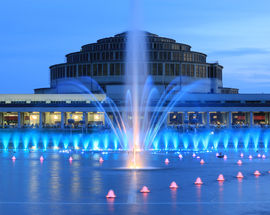 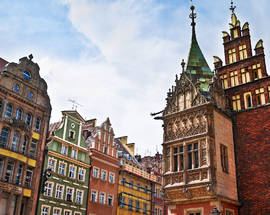 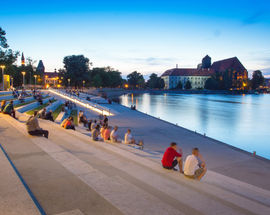 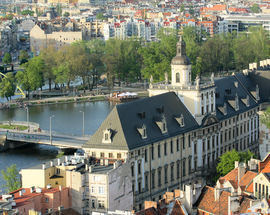 At Wrocław In Your Pocket, we’re well aware (thank you) that our guide’s greatest strength – thoroughness – is also its biggest weakness. So here we’ve condensed our guide down into one article of quick suggestions for those whose time here is limited.

For those planning a brief stop on their Central-European travels, exploring the Old Town and Ostrów Tumski (the Cathedral Island) will be a priority; should weather be good (and hopefully in the spring and summer it will be), some relaxation on one of the inner-city islands or a drink on the Oder River might be in order, and visiting the UNESCO-listed Centennial Hall should make it to your list as well.

Start in the very heart of the city, on the splendidly elaborate Market Square, one of the country’s absolute best. After admiring the facade and astronomical clock of the Town Hall, and meandering through its narrow alleys, make your way to the impossibly cute “Jaś & Małgosia” houses in the square’s northwestern corner, and from there to St. Elizabeth's Church, where for a small fee you can climb the 91m tower for absolutely splendid views of the city.

If you arrived the previous night or early in the morning, breakfast will probably be the very first thing you think about; for a solid start to your day, we recommend Dinette, Charlotte Chleb i Wino, and Giselle French Bakery Cafe. For coffee and map-consulting breaks, our top picks are laptopper-friendly Paloma, the well-established Central Cafe, and the slightly out-of-centre Bema Cafe (now also found on Plac Solny). That taken care of, you’ll have the energy to explore the Old Town streets, peering into the District of Four Denominations (bounded by ul. Kazimierza Wielkiego, Św. Antoniego, Pawła Włodkowica, and Św. Mikołaja) - where the White Stork Synagogue might be of interest, and passing by the Royal Palace (which probably won’t be the grand structure you’re imagining) and the Wrocław University building on the Oder River.

As you’re strolling along, keep an eye peeled for small statues of gnomes dotting doorways, alleyways and street corners - a Wrocław oddity now numbering in the hundreds. Started in 2001, this public art project commemorates the Orange Alternative, an underground protest movement that used absurdity and nonsense to stage peaceful, yet subversive protests during communism. Having made it to the Oder, your options are to lounge around on the islands between the city’s two banks (Słodowa Island) is the one with the large green space, and is a popular venue for summer concerts), or walk across to reach the Cathedral Island (Ostrów Tumski), the city’s birthplace and soul, where the first Silesian bishopric was built in the year 1000.

While not actually an island (the filling-in of a tributary put an end to that in the 19th century), you’ll note Ostrów Tumski feels completely removed from the bustle of the Main Square. As the name implies, you better get your churching mood on: apart from the elegantly Gothic Cathedral of St. John the Baptist (the fourth built on this spot), there are four more 13th-15th century churches and the Archdiocese Museum, which is filled with religious art. Just beyond lie the splendid Botanical Gardens, a haven of greenery, palm houses, and picturesque footbridges.

Whatever time you choose to refuel, our suggestions are the commie-tastic Konspira, rustic mainstay Pod Fredrą, or Ahimsa for the veggie crowd. As the afternoon progresses, take a tram out to the 1913 Centennial Hall, a structure designed by Max Berg to commemorate the 100th anniversary of the 1813 War of Liberation against Napoleon. while the the concrete behemoth might not be winning any beauty pageants, it is Wrocław’s only UNESCO-listed site, and features a multimedia Discovery Centre which details the building’s construction.

End the evening with a concert at the Wrocław Opera or the new National Forum of Music and dinner at the Barka Tumska riverboat restaurant. If you’ve still got some wind left in you or are itching to sample the local alco-scene, try Art Cafe Kalambur for art-nouveau craziness, Browar Złoty Pies or 4Hops for craft beer, or OK Wine Bar for a glass of fine red; alternatively, simply roam around the Market Square, the loud and wild Pasaż Niepolda, or the hip Pasaż Pokoyhof (both off of ul. Św. Antoniego) to see what makes your party-sense tingle.

Those with more time to spare will find plenty of other things to see and discover. We heartily recommend the new Hydropolis, a fantastic multimedia museum dedicated to water, housed in a 19th-century neo-Gothic water storage tank. Other institutions worth taking note of are the Contemporary Museum - which features exhibitions of varying quality by mostly local artists and is mostly worth visiting for its location in a cylindrical WWII bunker and the huge Train to Heaven sculpture outside, and the National Museum - where you can peruse a large collection of Polish art from various periods. However, the largest historical significance no doubt goes to the Racławice Panorama, a monumental cycloramic painting completed in 1894 by Jan Styka and Wojciech Kossak, which depicts the first battle of the Kościuszko Uprising and is now something of a pilgrimage site for patriotic types and schoolchildren. Architecture buffs might enjoy visiting the Architecture Museum and taking in more modernism than is probably healthy (such as the WuWA Werkbund estate or Erich Mendelsohn’s Petersdorff department store), while more active types can try out the Aquapark - one of the country’s finest - or make the journey out to Adrenalina Park (think quads, paintball, ziplines) in nearby Sokolniki.

For leisurely walks, make your destination the 19th-century fortifications at Partisan Hill or the increasingly hip Nadodrze district - once an impoverished post-war neighbourhood, now establishing itself as Wrocław’s artsy and hipster-friendly zone. Enjoy!

Festung Breslau: The Siege of 1945 feature
The 'Pagan Reaction' & the Non-Christian Roots of Poland History
All Saints' Day in Wrocław feature
see more