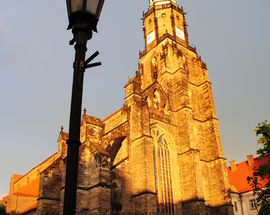 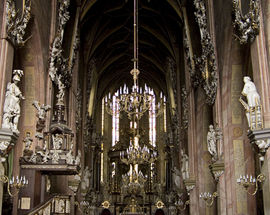 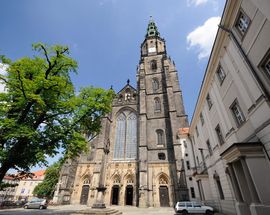 Świdnica’s other church, the imposing Roman Catholic Cathedral of Sts. Stanislaus and Wenceslaus boasts Silesia’s tallest church tower, coming in at 103 metres. Its first iteration was built in the 14th century by order of Duke Bolko II the Small, after a smaller wooden church standing on the spot burned down to the ground. In 1561-1629, as Protestantism was sweeping through Bohemia and much of Europe, the church too changed its denomination; then the Thirty Years’ War rolled along and - after some turmoil - it was eventually back to Catholicism as the church was handed over to the Jesuits. Unlike the Protestants, they had a flair for the sumptuous and baroque and decked out the interior accordingly, giving it its present look and feel. In 1740, during the War of Austrian Succession, Prussian forces invaded Silesia and apparently pissed over all that was holy, turning the church first into a prisoner-of-war camp, and later into a granary, damaging or outright destroying the furnishings and artwork. It wasn’t until 1773 that the church regained its original function, but the Jesuits - who had many enemies in Europe at the time - were ousted, and the building became state property. Thorough renovation works took place in the late 19th century, restoring the cathedral to its former glory.