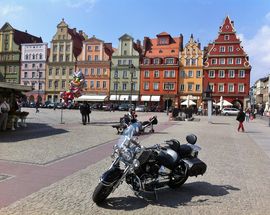 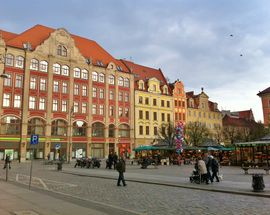 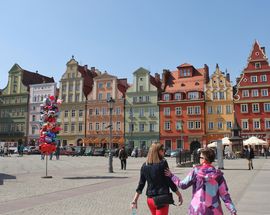 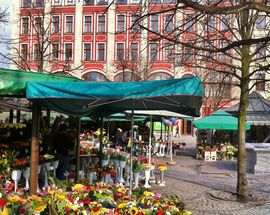 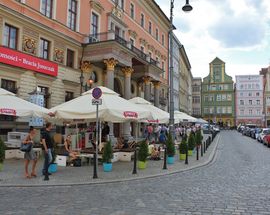 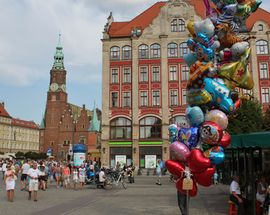 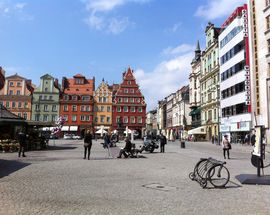 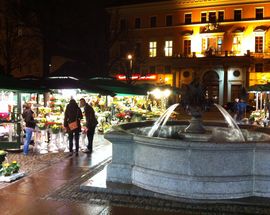 The main square’s little flower-loving sibling, the Salt Market was built quite early in the city’s history, most likely in 1242, while Wrocław was being reconstructed following the disastrous Mongol Invasion. Named variously Saltzring (Salt Square) and Polnischer Markt (Polish Market), the square was where salt from Wieliczka and Halicz and goods like leather, honey, and beeswax - mainly from Poland - were traded from the Middle Ages until the 19th century.

Some strange scenes took place here occasionally - the most vivid, perhaps, happened in the 15th century, when Wrocław was under Bohemian rule. At the time, the city’s inhabitants were largely influenced by the ideas of Czech reformer Jan Hus, a predecessor to Protestantism. The Vatican, outraged at such blasphemy, sent inquisitor John of Capistrano (a ‘soldier-saint’ who would later lead a crusade at age 70) to talk this heretical nonsense out of the Wrocław lambs. John’s fiery sermons were so effective, in fact, that worshippers willingly carried furniture and valuables out of their homes to be burned in a huge bonfire on Plac Solny. Things soon took a darker turn, as local Jews - the ultimate heretics according to the inquisitor - were burned at the stake along with the couches and jewellery boxes. In 1996, these events were commemorated with a flame-like Little Spire sculpture erected smack dab in the centre of the square; created by artist Adam Wyspiański, the sculpture is a nod to the (big) 90m Spire monument located next to the Centennial Hall.

This central location used to be occupied by a rather expressive sculpture of Prussian field marshal Gebhard Leberecht von Blücher - known for fighting Napoleon at the Battle of the Nations at Leipzig and the Battle of Waterloo - dressed in a Roman toga. The monument was unveiled in 1827, with the Salt Market renamed Blücherplatz to complete the honour; as the city was taking a savage beating in 1944, Blücher was removed from his perch and buried in the Botanical Garden for safekeeping. After WWII Wrocław fell into Polish hands, and the bronze chap was unearthed and eagerly melted down.

Today Plac Solny is known for numerous 24hr flower stalls, which turn it into a phantasmagoria of colours night and day. Points of interest include a 1997 ‘antique style’ dragon fountain, the 1822 neoclassical Old Stock Exchange building at no. 16, the early 18th-century Oppenheimer House at no. 4, an avant-garde modernist building from the 1920s - which used to house the definitely-not-PC ‘Pharmacy Under the Moor’ - at no. 2/3, and an underground WWII bunker (sadly not open to the public).

Pl. Solny 11
/wroclaw/kofeina-by-incognito_154412v
This cafe spot right on Plac Solny has a beautiful, airy exposed-brick interior and recently teamed up with the mobile pastry shop Słodki Chłopak in what we think is a great collaboration.  Grab brekkie in Dinette and come here for a lazy chat over co
see more

Pl. Solny 11
/wroclaw/konspira_127197v
Recreating the 1980s with Soviet newspapers, political cartoons, posters, and other era imagery while Polish 'hits' play from the speakers, Konspira calls itself a 'Centre for Historical Education' illuminating Wrocław's role in the Solidarity movement.
see more

Pl. Solny 11
/wroclaw/lodziarnia-la-scala_20204v
Servings of top-class ice cream and some half decent paninis keep La Scala choc-full of sweet toothed locals. Sit inside to marvel at the cherubs on the ceiling - most likely painted by the owners' children.
see more

Pl. Solny 20
/wroclaw/na-solnym_90765v
On top of tourist info and souvenirs, Na Solnym offers guided walking tours of Wrocław, with a special theme if requested. Excursions to interesting destinations outside Wrocław and throughout all of Poland are also an option.
see more

Pl. Solny 20
/wroclaw/Na-Solnym_90758v
This shop on Plac Solny sells a variety of city souvenirs, in addition to arranging tours, dispensing info, and selling concert tickets. Amongst the variety of things to stuff in your suitcase you'll find tourist standard souvenirs like postcards, ph
see more

Plac Solny 14
/wroclaw/winnica-na-solnym_138552v
A little wine bar tucked away in a beautifully green, vine-covered courtyard, remarkably peaceful given its location right on Plac Solny. They import their wines and champagnes directly from small family vineyards to keep prices low and offer all kinds o
see more