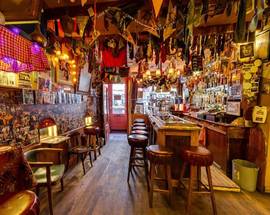 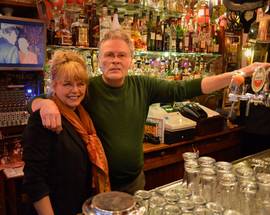 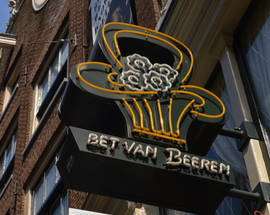 Although Amsterdam is now one of the most gay-friendly cities in the world, it wasn’t always such a pillar of tolerance. But one woman had an incredible influence on the Dutch capital and its residents. Bet van Beeren was born in 1902 and spent her childhood in the Jordaan district of Amsterdam, before opening her legendary bar ‘t Mandje, or The Basket, on the Zeedijk in 1927. Although the establishment was hardly advertised as a gay bar, it was a place where anyone gay, straight, bi or otherwise could have a drink, provided they behaved themselves. In those days the police could revoke a bar’s licence for promoting what we today would call a ‘gay lifestyle’, so Bet kept a close watch on her patrons making sure there weren’t any obvious displays of affection between same-sex couples with perhaps the exception of Queen’s Day – a tradition that began after WWII. On this magical day pretty much anything was possible and ‘t Mandje gained a reputation as the ultimate place to celebrate this Dutch holiday. That said, Bet usually took an interest in her patrons and if she observed anyone misbehaving, she would penalise them by cutting off an article of clothing with a butcher’s knife, hence all of the ties nailed to the ceiling.

As time passed, Bet became one of the chief attractions of her bar and that’s hardly surprising given her appearance and demeanour. An openly gay woman who drank like a fish and smoked like chimney, she was also known for her risqué wardrobe, which included a leather motorcycle jacket. This naturally raised a few eyebrows in her time, but she wasn’t only the first person to open a gay-friendly bar in the Netherlands, but also the first Dutch woman to gain a driving licence.

The oldest of 12 children, Bet had a tough childhood and it’s rumoured that she got drunk for the first time at the venerable age of 9. In the end, it was the drink that eventually claimed her life. It was not uncommon for her to knock back dozens of glasses of beer during a typical day at the bar, but this was simply part of her lifestyle and she enjoyed herself immensely while gaining the respect of her patrons and neighbours who often called her the Queen of the Zeedijk. When she passed away in 1967, she was laid out on the billiard table of the bar where 30,000 people paid their respects to her over the course of two days.

It was the end of an era and although her sister Greet carried on the traditions that she had begun at ‘t Mandje, the bar finally closed its doors in 1983. It looked as if Holland’s first gay bar would become a mere footnote in Amsterdam’s long history, but Bet’s niece, Diana van Laar, re-opened the bar with the help of her husband in 2008. Each piece of memorabilia was photographed and removed from the walls and ceilings and then cleaned before being returned to its original place. Today, Café ‘t Mandje is still the ultimate venue to celebrate Queen’s Day, but it’s also a great place to soak up a slice of the city’s history and to enjoy a tasty beer with new friends – gay or straight. Take a look at the vestiges of the past while listening to an Otis Redding or Ray Charles tune on the juke box and try to strike up a conversation with Diana or her husband. They might just show you Bet’s room upstairs, which looks just as it did all those decades ago. A replica of the famous bar can also be viewed at the Amsterdam Museum. For more information visit www.cafetmandje.nl. Photo courtesy of Cafe 't Mandje
Nightlife

Zeedijk 63
EDITOR'S PICK
/Amsterdam/Cafe-t-Mandje_111253v
This may very well be the oldest gay bar in the world. Opened in 1927 by local legend Bet van Beeren as a pub for everyone – gay, straight or otherwise …
see more
Editor's pick
Information

Westermarkt to 9
/Amsterdam/Pink-Point-and-Homomonument_93567v
Located in an award-winning design kiosk on Westermarkt, Pink Point provides general information about LGBTI+ life in Amsterdam as well as the nearby Monument …
see more