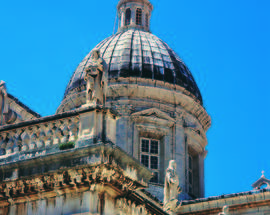 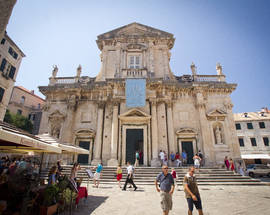 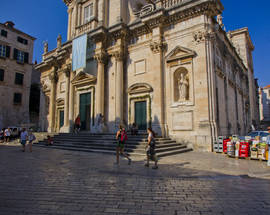 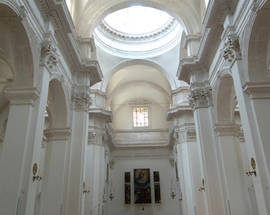 The elegant pale grey Cathedral at rosy sundown exemplifies the frequently quoted phrase “city of stone and light” (Jure Kaštelan). Its dome gracefully tops the skyline whichever way you look at it, and its baroque forms are one more chapter of the fairytale of the city streets. It was thought that the Cathedral, built between 1672 and 1713 by Italian architects Andrea Buffalini and Paolo Andreotti, was built on the site of an earlier 12th century Romanesque cathedral, destroyed in the great earthquake of 1667. However, following another earthquake in 1979, excavations showed that there had, in fact, been a Byzantine cathedral on this spot since the 7th or 8th centuries. The light and lofty interior is most famous for its collection of treasures, which includes reliquaries of St Blaise. The golden caskets containing the saint’s head and foot are thought to be the work of Byzantine masters of the 11th century. By the main altar is a painting of the Assumption by Titian which features a self-portrait of the artist. Mass: 07:30 and 18:00, Sun 09:00, 10:00, 18:00.