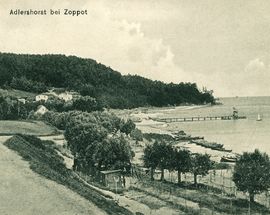 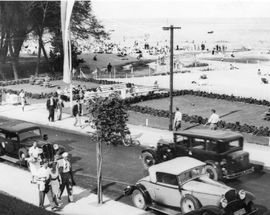 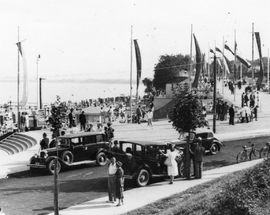 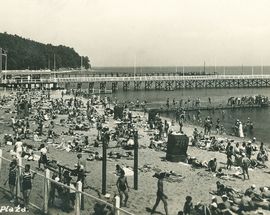 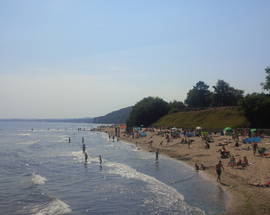 Squashed between the forests and cliff faces of Gdynia and the open beaches of Sopot, Orłowo is a smashing side trip, and comes complete with a cute little pier, sandy beaches, forest trails and a surprisingly decent scattering of eateries.

The name Orłowo (Adlershorst in German) supposedly dates back to 1666, to a time when some local fishermen were witness to the rare and noble spectacle of two eagles battling for supremacy in the skies above. The epic dual ended after two hours, only after the two birds had dropped into the sea with exhaustion. Suitably impressed by this display of nerve and courage the fishermen rescued the birds, took them to Gdańsk and henceforth awarded the area its name (orzeł meaning eagle in local lexicon).

That’s the legend, the facts are a little less rakish. According to records Jan Adler (German: adler - eagle) snapped up the land in 1829, and proceeded to cultivate and develop the land. On his behest an inn was constructed (today the School of Plastic Arts), and by the end of the 19th century a small community with a population of 50 had started to grow around it. This burgeoning seaside resort continued to expand during the interbellum and a ‘Therapeutic House’ was built on the hill. Polish writer Stefan Zeromski could regularly be found patrolling the area, and by the 1930s Orłowo was drawing some 10,000 holidaymakers annually. Guesthouses and villas were added to cope with this influx, as was a train station and post office. In 1935 the village of Orłowo Morskie was incorporated into the city of Gdynia, and while the pier was an unmitigated success, plans to complement it with a bathing house were interrupted by the outbreak of WWII. The post-war communist regime brought an end to the glory years and prosperity and saw the natural beauty of the area compromised by the construction of low-level blockish buildings. And so to today; Orłowo is back and better than ever. Regeneration and restoration are the words on the street, and you won’t find a better example of either than the gorgeous Poirot-era Willa Lubicz hotel. The new luxury apartment developments also demonstrate its increasing popularity among monied Poles looking for a bit of peace and quiet.
Places of Interest

/gdynia/orlowski-cliff_39913v
Why not take a wind-swept walk along the cliffs which inspired such notables as Stefan Żeromski and Queen Marysieńka. The Hel peninsula is visible on a good …
see more
Places of Interest

/gdynia/pier_39912v
This wooden pier was originally built just after WWI to a length of 150 metres, then extended to 430 metres in 1934 – no doubt to compete with its more …
see more
Museums

ul. Orłowska 3, Gdynia
/gdynia/tawerna-orlowska_22033v
A cross-timbered beachside restaurant with pier views and some peerless cooking. Inside it’s very much your typical coastal restaurant, with a model galleon, …
see more
Cafes

ul. Orłowska 6, Gdynia
/gdynia/domek-zeromskiego_40061v
You’ll find a selection of the works of writer Stefan Żeromski on display in this small museum and cafe which is located in the house where he lived in the …
see more