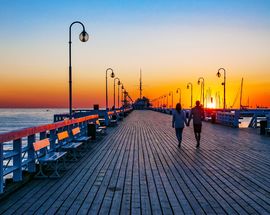 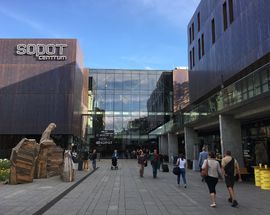 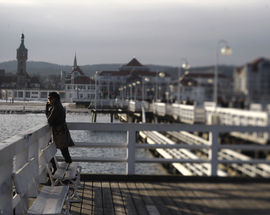 Sopot is one of the country’s most famous towns and is extremely fashionable particularly in the summer months when it often feels that half of the capital has decamped here to see and be seen.

The town’s reputation was built during the late years of the 19th century and the first few decades of the 20th when, as part of the German Empire and then as a part of the Free City of Gdansk, it became the summer home and playground for many of Europe’s ruling classes. Kaiser Wilhelm II, for instance, had a summer home here, (now the Maryla hotel) and a separate villa for his guests (formerly the Magnolia hotel). His wife, meanwhile, was responsible for the building of what is now St George’s Garrison Church at the top of the main street - ulica Bohaterów Monte Cassino.
Although there appears to have been human settlement here for over 2,500 years, the city only really started to grow once Jean Georges Haffner, a physician in Napoleon’s army returned after discovering it while stationed here in the Napoleonic Wars. The creation of a series of bathhouses and spas led to the town becoming an increasingly fashionable health resort which lured a select, affluent and aristocratic set drawn by the vibrant social life as much as by the soothing waters of the St Wojciech spring.

Damaged but not destroyed by WWII, the city attracted an increasingly Bohemian, artistic and later reactionary crowd during the years of communist rule when its fame was also increased by playing host to the Soviet Bloc’s equivalent of the Eurovision Song Content.

A recent multi-million euro investment has seen the lower end of Bohaterow Monte Cassino given a new and modern look with state of the art conference facilities, hotels, art gallery, bars, restaurants and clubs springing up to surround the centrepiece of the development - the fourth incarnation of Sopot's Resort House.

Today, Sopot is once again a hip and happening place with its trendy nightlife while its sandy and sheltered beaches and range of top class hotel and spas are once again attracting an international audience drawn by its beauty and value for money. Kilometres of cycle routes and forest paths also make it ideal for those who like active form of relaxation while visiting in the warm summer months opens up loads of opportunities for things to do on the sea. Visit outside of the high season and find a pretty little town with some very good restaurants and a relaxed air - whatever the weather.

With its sister cities of Gdansk and Gdynia on either side, Sopot is an excellent place to visit to relax, see the sights and then dance til dawn if the mood takes you. To keep abreast of what's happening in the Tri-city, follow us on Facebook, Twitter, Instagram, Vine, and Tumblr. We'd be delighted to hear your thoughts on the city and the guide to feel welcome so drop us a line at poland (at) inyourpocket.com.