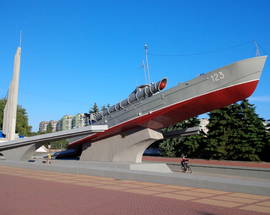 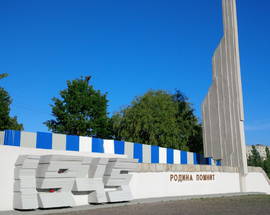 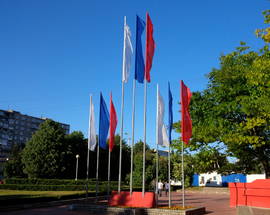 This dramatic naval monument, featuring an 18-metre-long ‘Komsomolets’ torpedo boat riding high on the crest of a wave, was erected in 1978 in honour of the thousands of Soviet Baltic Fleet sailors who participated in the East Prussian offensive. It was later renovated in 2010 and the epithet on the accompanying memorial wall behind reads: ‘1945: The Homeland Remembers.’

Some 200 ‘Komsomolets’ torpedo boats were produced and launched, many from the Leningrad shipyards, between 1940 and 1950. Heavily armed and capable of speeds of up to 48 knots (86km/hr), they made devastating sorties against German vessels in the Southern Baltic although the systematic laying of minefields greatly reduced their movements as the war progressed.
Show on map