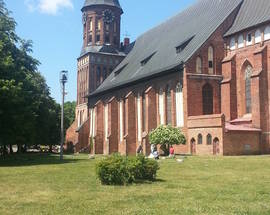 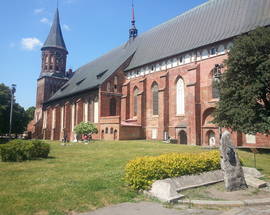 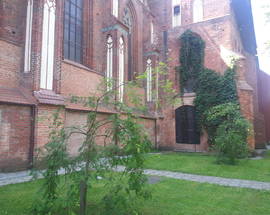 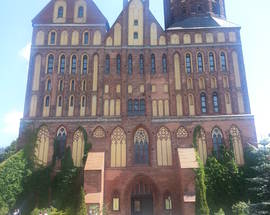 The city's iconic Gothic-style Lutheran cathedral, started in 1333 and completed over the course of the 14th century in the red brick which punctuates so much of Hanseatic architecture, has had to bounce back from some serious setbacks over the centuries. Sitting bang in the middle of Kant Island in the Pregel River, hundreds of stout oaken stilts had to be inserted into the boggy ground before work could even begin and, having partially overcome that initial hurdle (subsidence is still a pressing issue), it had to be restored several times as a result of devastating fires. Indeed, the highly conspicuous absence of one of the two original spires was the result of one such fire in 1544. WW2 saw the cathedral more thoroughly destroyed, this time by Allied air raids, and it remained in ruins until 1992 when a huge rebuilding project got underway.

Inside you can normally get access to the church part downstairs and/or the Kant Museum, which is located up a steep spiral staircase in the foyer. The church part interestingly features both a Lutheran chapel (located under the restored spire, where a group of around 100 sheltering civilians died during a WW2 air raid) and a Russian Orthodox chapel, the latter one also being added during refurbishment in the early-1990s to symbolise reconciliation within the local community.

In terms of artwork and fittings, the centrepiece downstairs is without doubt the magnificent and fully-operational Baroque-style organ, which was installed in 1888 to replace an earlier one from 1721. The red bird which you'll see perched on top is rather aptly, given the history of the cathedral, a phoenix rising from the flames. Upstairs in the Kant Museum, the secular 17th-century Wallenrodt Library which once had a collection of over 10,000 books and was restored in 2005 is the must-see.

Several key historical figures have been interred in or around the cathedral, including Martin von Wallenrodt (the former chancellor responsible for the Wallenrodt Library), Albrecht of Prussia (the last effective Grand Master of the Teutonic Order) and of course Immanuel Kant. Various epitaphs to those buried here can be seen around the outside walls, but the northeastern corner is certainly the most prominent section with Kant's Tomb and a monument to Albert of Prussia facing each other in close proximity.
Show on map

No Credit cards
Facilities for disabled