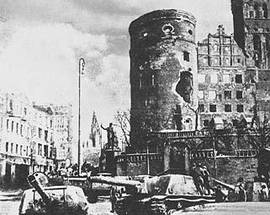 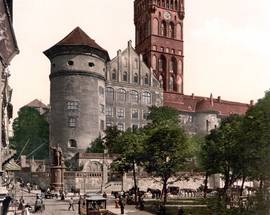 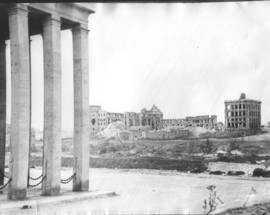 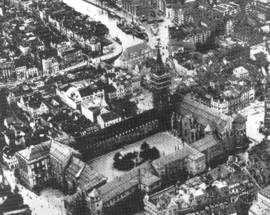 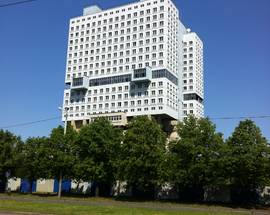 With two World Wars and the passing of time, much of the old city of Königsberg has been lost and the most notable architectural casualty is without doubt the imposing and iconic structure of Königsberg Castle, which once stood on a hill overlooking the River Pregel, close to where the House of the Soviets now stands. Originally founded as a wooden fortress in 1255 by the Teutonic Order, it replaced an earlier pagan settlement and took the name of “Königsberg” (King's Town) in honour of the powerful King of Bohemia, Premysl Ottokar II.

The Order quickly upgraded it to brick and continued to fortify over the next 150 years to make it one of their key strongholds, second only to Marienburg (today Malbork Castle, 130km to the southwest in modern-day Poland). Indeed, when they were eventually forced out of Mareinburg in 1457, it was Königsberg Castle to which they beat a hasty retreat. In addition to a host of defensive considerations, including a moat and no fewer than 13 towers (the principal one being the highest building in the city at 84 metres), the castle also featured a hospital, a convent and a Lutheran church within its walls.

In 1525 the castle became the property of the new self-appointed Duke of Prussia, Albrecht of Brandenburg, and was thereafter a key administrative building in the Prussian Empire with the church hosting the coronations of Frederick I (18th January 1701) and William I (18th October 1861). Towards the end of its functional life the north wing of the castle was also home to the Prussian Museum but, when the castle was targeted by the RAF during WW2, thousands of exhibits, archives and books (as well as Russian artefacts looted by the Nazis and believed to include the legendary Amber Room) were lost in the ensuing fire and chaotic aftermath.

Despite the carnage of WW2, though, the walls of the castle remained largely intact and stood among the new Russian inhabitants of the city for a further two decades. In 1968, however, the Soviet authorities finally wiped the castle out completely, claiming that they were ridding Kaliningrad of a lasting reminder of Prussian imperialism and aggression.
Places of Interest

House of the Soviets

Leninsky pr.
/kaliningrad/House-of-the-Soviets_137456v
If all the eyesores in the world had a mother then this 21-storey derelict behemoth, plonked brazenly on a prime piece of city centre real estate, would be …
see more