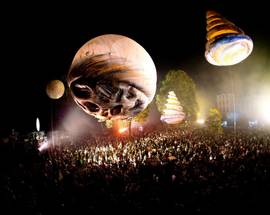 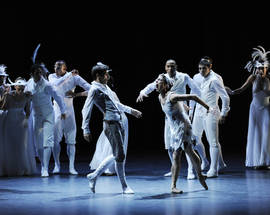 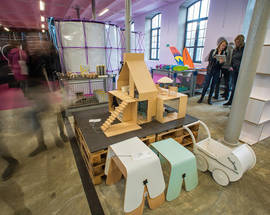 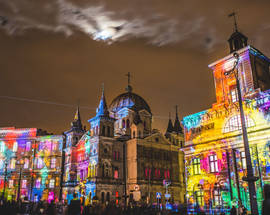 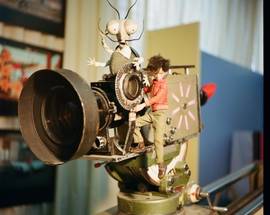 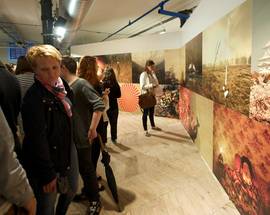 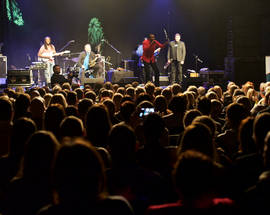 Though it might not be Kraków or Warsaw, Łódź has no shortage of cultural events to keep locals and visitors entertained. One thing is for sure, this city is not suffering from an identity crisis; many of the festivals tie back to and expand on the city’s strong points, which include its industrial past, its rich filmmaking tradition, and the various cultures responsible for its growth. For some reason October is the busiest time on Łódź’s cultural calendar, with events such as the Łódź Design Festival, SoundEdit, Fashion Week Poland, and the highly recommended Light Move Festival. Here’s a month-by-month rundown of the most popular festivals:

Yapa - While there are many annual sung poetry festivals in Poland, Yapa boasts perhaps the biggest reputation. Part of what makes the atmosphere so unique is the level of participation from the audience, which voices approval (and sometimes disapproval) not only with cheers/boos and clapping, but also a variety of whistles, sirens and noisemakers. www.yapa.art.pl

Łódź of Four Cultures - There are four cultures responsible for the late 19th century rise of the mighty industrial Łódź: that’d be the Poles, Jews, Germans, and Russians. The aim of the Four Cultures Festival is to impart a greater understanding of the city's roots through film, literature, theatre, and music. Many performances will take place in open, public spaces. Organised by students (thus explaining the rowdy atmosphere), www.4kultury.pl

International Ballet Festival - The Grand Theatre in Łódź has been hosting this event every two years since 1968, inviting ensembles from all around Europe as well as further afield (USA, Canada, Cuba, Israel). www.operalodz.com

Se-Ma-For - The first European festival dedicated solely to stop-motion animation, Se-Ma-For is organised by Poland's oldest animation studio (with a tradition going back to 1947). www.festival.se-ma-for.com

Good Taste Festival - Łódź has a strong filmmaking tradition, and now chefs and restaurant owners are trying to carve out a niche for themselves, hoping the city will become as famous for its gastronomical marvels as for its movies. The Good Taste Festival is an opportunity for restaurants to compete for top spot, serving scrumptious dishes to the masses for a mere 10zł. www.festiwaldobregosmaku.eu

Fotofestiwal - After a half century of dominance of Film and the Film Industry in Łódż, a group of passionate photographers, journalists, students and teachers set out to reclaim the city in the name of Photography. They organised the first edition of their Fotofestiwal in 2001, which, at the time, was the first independent photography festival of its kind in Poland. Held over ten days, there are countless events, exhibitions, workshops, parties and panels happening during the festival so make sure to mark your calendar and check out the Fotofestiwal's fantastic website for a full listing of events. Whether you’re a seasoned snapper or just an instagram tapper, this festival will surely enthral and inspire. www.fotofestiwal.com

Urbanator Days - Presented by Michał Urbaniak, this unique festival aims to educate in an unparalleled atmosphere, where anyone can join in jam sessions hosted by renowned musicians and improvise (for free). Bring your own instrument! www.urbanatordays.com

International Festival of Comics and Games - Quite possibly the largest comic book festival in Central Europe, and one that draws a large international crowd yearly. Meet some of the biggest names in comics, purchase the newest graphic novels, and take part in workshops. www.komiksfestiwal.com

Łódź Design Festival - Fittingly for a city with a strong industrial tradition, this festival (the biggest of its kind in Poland) showcases the best of contemporary Polish design, featuring a massive array of events with lectures from world-renowned specialists and a “Make me!” contest for young designers. www.lodzdesign.com

SoundEdit - Each year the International Festival of Music Producers and Sound Designers celebrates the motto “I Am the Sound” with unique and talented artists. www.soundedit.pl

Light Move Festival - One of the big draws for visitors, Light Move Festival sets Łódź alight with brilliant colors and 3D mapping, allowing inhabitants and tourists a fresh look at the well-known city streets. The light installations will be accompanied by concerts, performances, and art shows. Recommended. www.lightmovefestival.pl

Explorers Festival - This festival is a chance to meet up with international explorers, share their experiences, watch films and take part in various competitions and workshops. The programme looks at a vast array of high-adrenaline activities such as wall-climbing, base jumping, and mountaineering, and past guests include big names such as Reinhold Messner, professor Bertrand Piccard, Sir Edmund Hillary and Sir Christian Bonington. www.explorersfestival.pl

Triennial of Tapestry - It might only take place once every three years, but when it does happen it encompasses the better part of the year (the 2013 edition lasted from May until November). Organised by the Central Museum of Textiles, the festival celebrates Łódź’s rich textile manufacturing tradition with eye-catching tapestries. www.muzeumwlokiennictwa.pl

Fashion Philosophy - Fashion Week - This is one of the biggest fashion events in Poland, and it takes place biannually to keep up with the seasons (usually in April/May and October). After the fashion shows you are welcome to after parties at various Łódź clubs, with entrance on the same pass as the preceding fashion show. www.fashionweek.pl