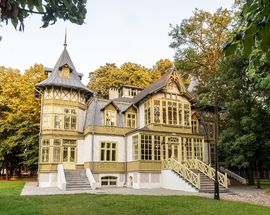 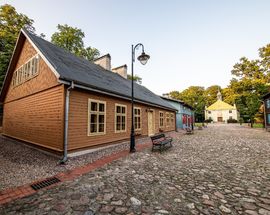 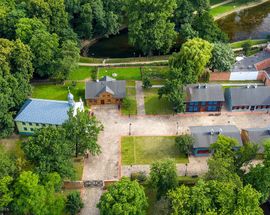 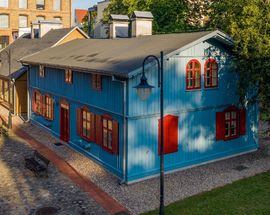 Tucked behind the Central Museum of Textiles is a unique open-air museum dedicated to the wooden architecture that dominated the streets of Łódź in its early years. Until roughly 1830 almost every structure built was wooden, and many of those were created to house the influx of workers needed for the city’s booming manufacturers (often the homes included workshops where tradespeople like weavers could work). Wood fell out of favour in the 1860s and 1870s as more homes began to be built out of brick, and their numbers continued to dwindle as many wood buildings were destroyed during World War II. Today the museum features several examples of the era’s architecture, including a summer villa, a one-story house for workers, a tram stop (serving as the museum's ticket office), several craftsmen houses, and a 170-year-old wooden church. Five of these historic buildings are home to the permanent exhibition Lodz microhistory. Human Microhistory, which tells the story of multicultural textile-producing Łódź from the perspective of the era's inhabitants. The fates of these individuals are shown over the course of the nineteenth and twentieth centuries against the background of dynamic historical and social events that took place here. The inspiration for these micro-stories were family memories, diaries and interviews that record the oral histories of the oldest inhabitants of Łódź. The museum is arranged along two 'streets' that include lamps and street signs to add to the authenticity. The two standouts are the elaborate villa, which was moved to the site from Ruda Pabianicka (a village that was absorbed by Łódź) and the church, which was erected between 1846-1848 and moved from Nowosolna (also a village that became part of Łódź). A great place to begin your tour – which is self-guided – is at the weaver’s house, which has been fully kitted out with period furniture and accessories down to the chamber pot beneath the bed, and offers English descriptions of what life was like for the city’s labourers. Visiting time: 1 hour.

ul. Piotrkowska 282
featured
/lodz/central-museum-of-textiles-in-lodz_20755v
To understand exactly what Łódź is all about, and to really get under the city’s skin, a visit to the largest textile museum in Europe is a good place to start. The two floors of exhibition rooms containing a mind-boggling array of steam-driven looms,
see more
Featured