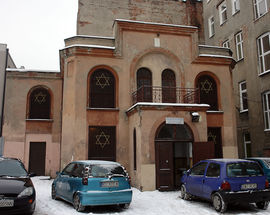 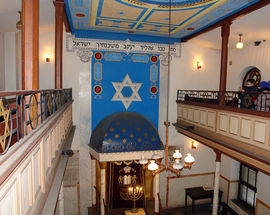 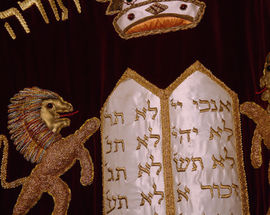 The oldest surviving synagogue in the city was built between 1895 and 1900 by the Reicher family foundation and only survived the Second World War because it was used for storing salt. The war did unfortunately destroy the interior as well as an allegedly lovely Star of David stained-glass window. A plaque on the east wall commemorates the synagogue’s founder who starved to death in the Łódź Ghetto. The Nissenbaum and Lauder foundations renovated the shrine in 1989. Religious services are no longer held here, but can be attended at the synagogue on ul. Pomorska 18.

Open by prior arrangement with Jewish Community.

ul. Bracka/ul. Zmienna
/lodz/jewish-cemetery_19156v
The largest Jewish cemetery in Europe holds 180,000 graves, with many laid to rest inside ostentatious tombs that are works of art themselves (including the biggest Jewish mausoleum which belongs to Israel Poznański). Less ceremonious was the burial o
see more

ul. Pomorska 18
/lodz/jewish-community-centre-synagogue_22224v
Open for prayer and religious services plus a number of other services provided. The Jewish Information Office on site can help you find information about your Jewish roots in Łódź, how to find a family grave, or how to contact the rabbi, find out about
see more