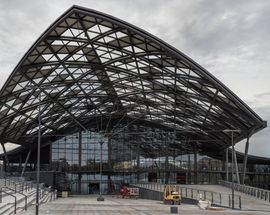 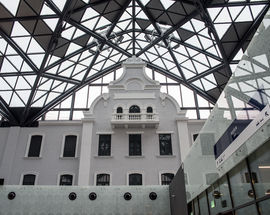 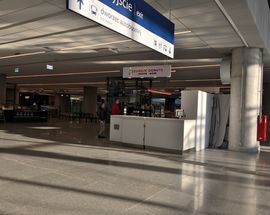 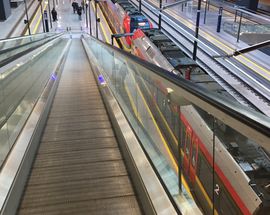 On December 12, 2016 the first train rolled into the newly designed Łódź Fabryczna Central train station after a 5 year hiatus. This was a monumental and indeed historic moment for the city and the region as the new station not only offers new connections and modern conveniences, but it is the very heart of the city’s plan to rejuvenate the entire city center alongside the EC1 buildings. Shortly after the opening of Łódź Fabryczna IYP stopped by to explore the new station.

We made our initial approach to Łódź Fabryczna from the west side, ie the Kilińskiego Street side. The new station was so new when we visited that the city government still hadn’t even decided on an actual address for the station. We hopped on a tram at the corner of Piotrkowska and Zielona streets which took us all the way to the grand west entrance of the new station. Many of the trams that criss-cross the city centre have been re-routed to stop at one of the two new tram stops that have been created around the new station. As soon as we stepped out of the tram our first impression was that the structure was absolutely breathtaking basking in the morning sun. We made our way down the sloped concrete terrace, passed under the pointed glass sail that juts westward and entered the main entrance.

Upon entry it isn’t hard to believe that this is the most modern railway station in Poland (and believe us we’ve seen them all). The scale and architectural vision immediately grab you and your eyes are drawn upward. The main roof is a giant arched canopy made up of 10,000 glass and metal panels that are strategically placed to reflect and refract the most amount of sunlight directly down into the station. After we finished gawking at the ceiling we began exploring what we’ll call the ‘ground level’, which is in fact actually located 8 metres underground. One of the great structural achievements of the building is that the sheer size of the building coupled with the angled terracing and sloping open spaces surrounding it, immediately distort your sense of perception.

The pristine and polished granite floors of the wast wing meet a giant polished black ‘obelisk’ which houses several ticket offices where you can buy tickets for PKP Intercity, Regional Transport and Łódź Agglomeration Railway trains (ŁKA). On the other side of the “obelisk” there are several islands so to speak- one press stand and two cafes. One of the cafes was closed and the other was (cue the drum roll)… Dunkin’ Donuts! We were shocked and delighted to discover that our favourite American fast food pastry pusher had opened their second Łódź location right in the middle of the new train station.

After grabbing a Boston Creme and a cappuccino to-go we headed towards the east wing of the station by circumnavigating the tracks and the platforms one level below. The second level, or -1 as we would call it, is 16.5 metres under ground and has four platforms and eight tracks. The current train schedule will handle roughly 125 trains per day and the capacity is around 150. At the moment Fabryczna is a terminus station meaning all trains end here, however there is already a plan in motion to build a 6km tunnel underneath the west part of the city centre to connect Fabryczna with Łódź Kaliska, the second biggest station. This plan is phase two of the city’s ambitious railway restructuring plan and is targeted for completion in 2022. Once the tunnel is completed it will allow high speed Domestic and international trains to travel straight through the city which could potentially make Łódź the biggest railroad hub in Poland.

But let's not get ahead of ourselves. Entering the east wing of the station is also quite impressive and totally different from the iconic and jutting west wing. The east wing is flanked by facades of large white townhouses which are a nod to the old station and instead of a single glass canopy they are covered by glass buttresses. In the townhouses there are ticket offices a commuter rail (ŁKA) Passenger Centre and in the north-east part there are lockers as well as ATMs and an infopoint. The east entrance takes you out to Targowa street and just a few minutes walk to the EC1 buildings. After lingering a bit longer in the east wing contemplating the marvellous structure and the hundreds of thousands of man hours it must have taken to design and build such a magnificent structure, we headed down to our platform, boarded our train and bit into our doughnut just as the train left the station, right on time.
By Train

Pl. Sałacińskiego 1
/lodz/lodz-fabryczna-train-station_40909v
On December 12, 2016 the first train rolled into the newly designed Łódź Fabryczna Central train station after a 5 year hiatus. This was a monumental and …
see more
By Train

Al. Unii Lubelskiej 3/5
/lodz/lodz-kaliska-train-station_40911v
Łódź Kaliska offers all the essentials – an ATM, toilets and kiosks for Łódź transport tickets and mobile phone needs. Those who need to purchase a train …
see more