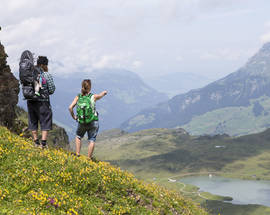 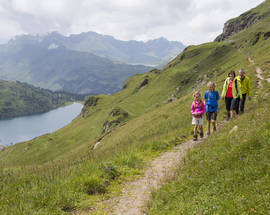 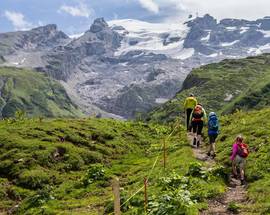 This popular A - B route between Melchsee Frutt and Engelberg (or vice versa) is considered to be one of the most beautiful hikes in Central Switzerland. From the very start a mythical world of mountains and lakes unfolds before your eyes. We love it, but on a sunny weekend you're unlikely to be alone.

Travel to Stöckalp (by train and bus, duration from Lucerne a little over one hour) and then take the cable car up to Melchseefrutt, where on a clear day you can enjoy breathtaking views of the Bernese Alps in the distance. Here you start the hike by strolling around Lake Melch. From there you continue on to the turquoise waters of Lake Tannen (the only artificial lake on the trek) and then head down via Tannalp towards Hotel Engstlenalp, which first opened its doors in 1892 and which is now in its fourth generation of hospitality. You have left the Canton of Obwalden and are now in Canton Bern, but not for long. Continue to the deep-blue Engstlen lake, where the ascent to the hightest point on the hike, the Jochpass (2207m above sea level), begins. There's a splendid reward awaiting you once you reach the top; alpine meadows and the crystal clear mirror-like Lake Trüb and the mighty glacial Mount Titlis ahead. The hike ends at Trübsee cable car station, where you can ride down to Engelberg.

The hike should be snow-free from July until the end of October. Allow for at least five hours of hiking including breaks for the well sign-posted 17.6 km-long trail (a 600m elevation difference) and be sure to make it on time for the last cable car down. The whole trip from Lucerne will take around eight hours. The Swiss train service offers a package for the train to the hike departure village, lifts up, lifts down and travel by train back to the original town.