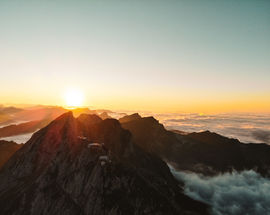 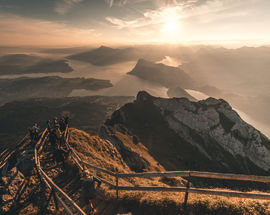 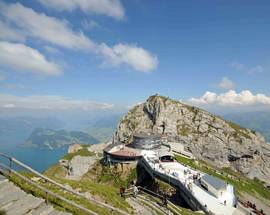 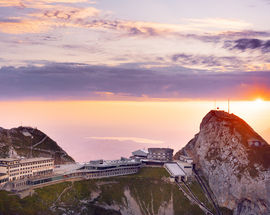 Except during the very worst weather, you’ll see Mount Pilatus’ imposing peaks from almost anywhere in Lucerne. At 2,132m above sea level it’s the highest and most rugged of Lucerne’s three local mountains. Medieval legend connected Pilatus to Pontius Pilate (Pilatus in German and Latin), the Roman official who authorised the crucifixion of Jesus. The despised bureaucrat was said to be buried in a lake on Pilatus, which no longer exists. Climbing the mountain was banned by law until the 16th century, for fear this might provoke storms that would destroy Lucerne. The ban has long since been removed and Pilatus is now one of the most popular peaks to visit. With several restaurants, a hotel, rock-climbing, a rope park and a long summer toboggan run there are plenty of options. And there will always be the grassy slopes, the woods and hiking trails and the view far into the distance. You can reach Pilatus all year round by the ‘Dragon Ride’ cable car from Fräkmüntegg. Taking the bus to Kriens and the gondolas to Fräkmüntegg, the whole trip takes around one hour and 15 minutes. In summer (May - November) you can reach Pilatus by the world’s steepest cog railway from Alpnachstad too.