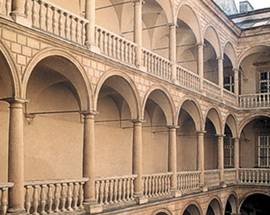 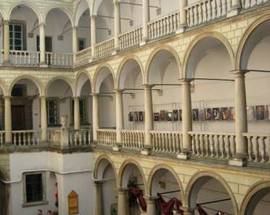 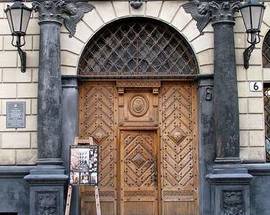 This is a unique monument of the Renaissance period, one of only a few existing in Ukraine, and is the largest structure on Rynok pl. Until the late 16th century the area on which the palace stands was occupied by two smaller buildings, which were purchased by a Greek merchant named Constantine Kornjakt. He subsequently ordered the reconstruction of the two houses into a new grandiose edifice. Fragments of the older structures have been preserved and include the Gothic hall (an unmatched sample of Lviv’s Gothic influence) and the cross-sectional support beams that hold the third floor ceiling. Following Kornjakt’s death, the house was taken over Jakub Sobieski, the father of the future Polish king Jan III. From this time on the house served as a royal roost. In 1634 the residence was occupied for a short time by Wladyslaw IV, the Polish conqueror who occupied Moscow and seized the Russian crown.The Polish-Russian Eternal Peace Treaty (anything with a name this lofty deserves to fail) was signed at the palace in 1686. Since 1908 the building has housed a museum. One of the brightest expositions of any of the city’s museums, the Royal Chambers, can be found here. The palace’s Italian Yard is a Lvivian favourite and is not to be missed.